23 lakh boxes of apples reached the mandis of the country: records are being kept in the Fagu control room for monitoring, 4191 trucks and 2630 mini trucks passed till August 12 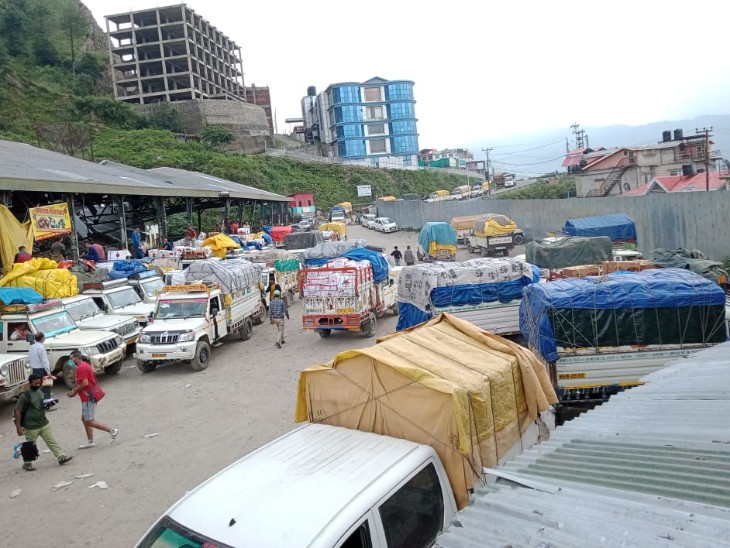 Cars laden with apples parked at the control room set up in Fagu, Shimla.

Apple season has started in Himachal Pradesh. So far 22 lakh 97 thousand 382 boxes of apples have reached the mandis of the state as well as across the country. The administration is taking full precautions to keep the supply of fruits smooth during the season. According to the officials, earlier apple carts used to get lost, it could not be traced, but now it will not happen. Now all records are being kept.

Theog’s SDM Saurabh Jasal said that a control room has been set up by the administration in Fagu since July 15 to monitor exports during the apple season. There the complete details of the vehicles laden with apples are recorded. As per the records, 4191 apple trucks and 2630 pick-up vehicles have passed through Theog-Shimla route till August 12. To keep their records, in addition to the police, the Patwari or Panchayat Secretary of the Revenue Department and the field officer of the Horticulture Department have been posted in the control room.

Staff deployed for surveillance checking the records of an apple truck.

The SDM said that in this control room, complete records of apples coming from 9 fruit and vegetable markets of the district Rampur, Kullu’s Sainj, Parala, Rohru, Kotkhai, Theog, Narkanda, Kharapathar etc. are kept in this control room. The way apple carts were lost in the past, it will no longer be like this. The administration has made such arrangements, in which in case of missing of vehicles, it can be traced immediately.

The number and number of boxes and the name and address of the driver are recorded for the cars laden with apples. This control room is working 24 hours. Apart from this, a control room has been set up at Naina in Balag on the border of Sirmaur, as most of the apples from Rohru, Jubbal and Kotkhai reach the rest of the mandis of the country through the Chaila-Neri bridge-Solan route.

New guidelines on the treatment of corona: Doctors should avoid giving steroids to the patient, due to this there is a risk of black fungus; Get tested for TB in case of excessive cough

Maharashtra Congress leader’s letter to Sonia Gandhi: Shiv Sena and NCP together are weakening the Congress, 12 Congress ministers are not working on the party’s agenda