24.5 kg charas recovered from canter at Pathankot toll plaza: Supply was to be made from Himachal to Punjab for rave parties, Amritsar youth caught with drug money after questioning driver-conductor 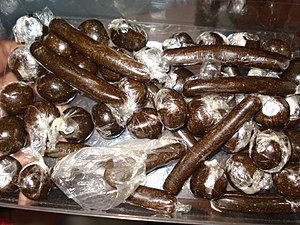 Charas was to be used in rave parties.

The team of Narcotics Control Bureau has recovered 24.500 kg charas from a canter coming from Himachal Pradesh to Punjab. The team arrested the driver and conductor of the canter and after interrogation caught a youth from Amritsar with drug money of 61 thousand rupees. At present, the police is interrogating all the accused after arresting them. The accused told that the charas was to be used in rave parties. The entire consignment was to be delivered at Verka Chowk, Amritsar. The accused driver and conductor have been identified as Nazir Mohammad and MD Rafi. At the same time, the name of the youth caught from Amritsar is being told as Rahul Uppal.

According to the information, NCB had received information that a large consignment of charas is coming towards Amritsar from Chamba in Himachal Pradesh. After receiving the information, the NCB laid siege near the Pathankot toll plaza. In the meantime, blue colored canter number HP 73 1465 was seen coming from Pathankot side. When the team examined the canter, 24.500 kg of charas was found from it. Initial inquiries revealed that the charas was to be transported to states other than Punjab.

Amritsar youth also taken into custody
During interrogation, the accused told that a smuggler sitting in Himachal controls the entire network. This charas is also supplied from Himachal to other states. After the information, the police has also arrested a person named Rahul Uppal from Amritsar. Who had to receive this consignment. Police has also recovered drug money of Rs 61 thousand by taking Rahul into custody.