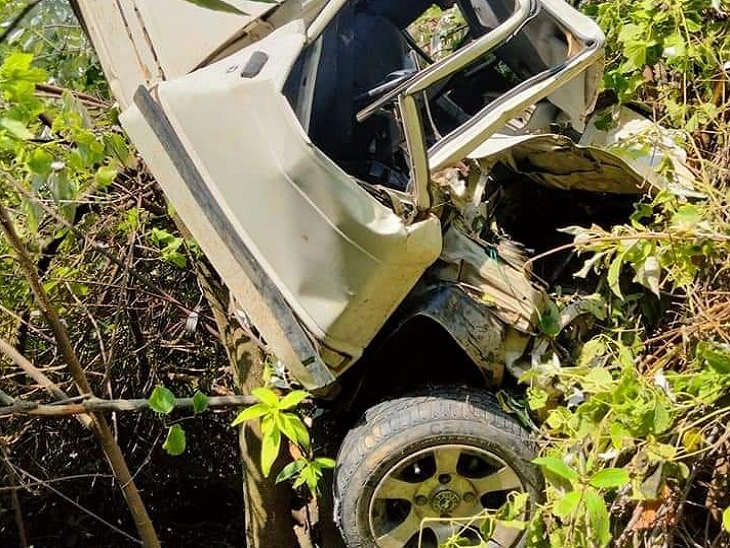 The car crashed after falling into a 150 meter deep gorge.

Four people, including a pregnant woman, have died in three accidents in Himachal Pradesh on Monday. There are two people missing, whose search is on. A pickup accident occurred in Nerwa of Chaupal and fell into Tons river. There were 3 people in the pickup carrying the apple. The body of one has been recovered, but 2 is still missing. NDRF team has been sent to the spot.

According to the information received, a pickup (HP 08 A-3697) was carrying apples from Tikri to Saharanpur. But she suddenly fell back near Guma and fell into the Tons river. There were 3 people in the pickup, who got washed away in the strong current of water. SDM Chaupal Chet Singh said that the team of NDRF is engaged in the search. A dead body has been found on the bank of the ravine, which has been identified as that of Balkaram’s son Phim Das. Balakram’s body was found lying on the sand on the bank of the river.

The door of the moving jeep opened in Sirmaur, the woman died after falling

A woman fell and died after opening the door of a pickup crossing the Giri bridge in Sirmaur’s Rajgarh. The woman was also 5 months pregnant. The deceased woman Manju was going from Solan to Nohradhar with her husband Prem Lal son Hetram resident Nohradhar and her daughter when the accident happened on the Giri bridge. Police have started investigation by registering a case.

There has also been a painful road accident in Theog. Father and daughter have died in the accident. While the husband of the deceased is badly injured. He has been admitted to IGMC hospital for treatment. At the same time, after registering a case, the police handed over the bodies to the relatives after post-mortem. According to the police, a car rammed into a 150-metre deep gorge in Dharech. The reasons for the accident are yet to be ascertained. The deceased have been identified as Ramanand (65) resident of village Stog and his daughter Sheela Devi (44) of village Dalog.