Accused of robbery arrested in 6 states: Tried to escape by tricking the police team that arrived, one country-made pistol and four live rounds recovered from possession

Aug 14, 2021 Gogunda police caught him with a country-made pistol and four live cartridges from his village., ShravanSingh, was caught by the police, who has carried out the robbery in many states 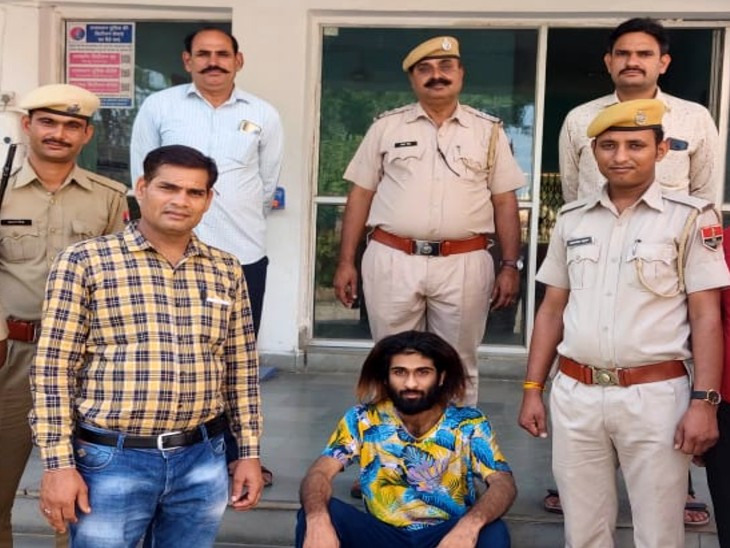 Accused Shravan Singh in the custody of Gogunda police.

On Saturday, Gogunda police station of Udaipur district managed to nab Shravan Singh, the wanted accused in the robbery case in several states. In the presence of more than a dozen policemen, the accused Shravan Singh tried his best to escape by giving a spit. Police have recovered one country-made pistol and four live rounds from the possession of the accused.

Gogunda SHO Praveen Singh said that on November 8, 2020, Pankaj Soni, a businessman of Barwara in the police station area, lodged a case of robbery. While robbing the merchant returning to his village after closing the jewelery shop at gunpoint, 4 miscreants riding a bike robbed 6 thousand cash, about 2 kg of silver and 15 grams of gold jewelry. In the case when the police interrogated some suspects after their investigation. Where the name of 5 members of Shravan Singh’s gang surfaced. Taking action, the police arrested the gang members Roshan Singh, Mahendra Singh, Milan Singh and Bhagwat Singh.

The accused was constantly hiding

The police officer said that even after all the members were caught, the main gangster Shravan Singh was constantly hiding. Wherever the police were raiding. The accused ran away from there. The police got information on Saturday that the accused had come to his village. On this, a team of more than 1 dozen policemen surrounded the entire locality and arrested Shravan.

Cases of robbery registered from Udaipur to Mumbai

During this, the police have also seized a country-made pistol and four live rounds from the possession of the vicious accused. Accused Shravan Singh is wanted in the case of robbery in about 6 states including Udaipur, Rajsamand Jaipur and Mumbai.