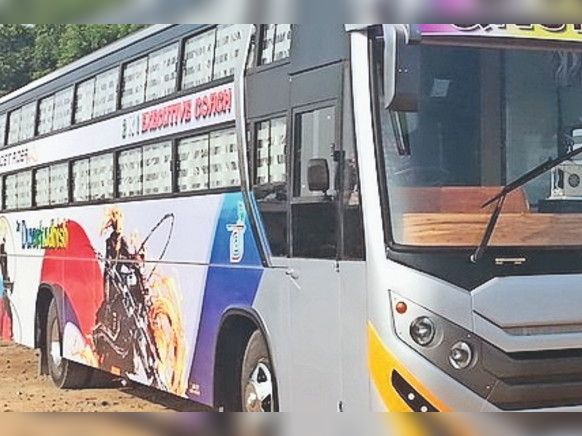 Action is now being taken on illegally operated valve buses from outside states. RTO Rampur Tularam has seized an illegal luxury bus running on the Rampur to Delhi route. Bhaskar had published this news prominently. After which this action has now taken place. This bus was also blacklisted by Kullu RTO earlier. HRTC employees had alleged that even from Rampur to Delhi, luxury buses are running on illegal lines.

This bus named Northern Travels had gone for Delhi on an illegal route. Buses from outside states are hurting the state exchequer by carrying passengers illegally. AC buses are being operated despite not having a valid route permit to operate the buses. Delhi’s Kashmere Gate, Red Fort, Majnu Ka Tila and luxury buses are carrying passengers from the Municipal Corporation parking at Tuticandi crossing in Shimla. AC buses are going from Delhi Chandigarh to Manali via Ambala, Zirakpur, Old Panchkula, Pinjar, Nalagarh, Swarghat.

Around 10 to 20 AC buses are plying on the routes without paying tax. Which is being duped by the state government. In the name of package tour, private operators are operating these buses keeping the rules in mind. Transport Corporation and Himachal Tourism Corporation have to bear the brunt of illegal AC buses. Bookings for AC buses operating from Shimla are available on various online bus booking portals.

The bus was not even a fitness pass, was running without documents: This Northern Traveler Volvo bus was being driven illegally even though there was no fitness, no documents and no route permit from Delhi to Rampur. Because of this, the Volvo bus of the Transport Corporation had to take a nominal ride from Rampur to Delhi. At the same time, online booking was also being done illegally. RTO Rampur Tularam told that the Volvo bus of the Jury-Delhi route, it is a tourist bus, but the Volvo bus is picking up passengers from everywhere. Volvo has been confiscated for violation of rules.