Amazing of sniffer dog: In Vadodara, sniffer dog caught 6 gang-rape and murdered in 24 hours, on seeing one of the accused started barking ‘Java’ 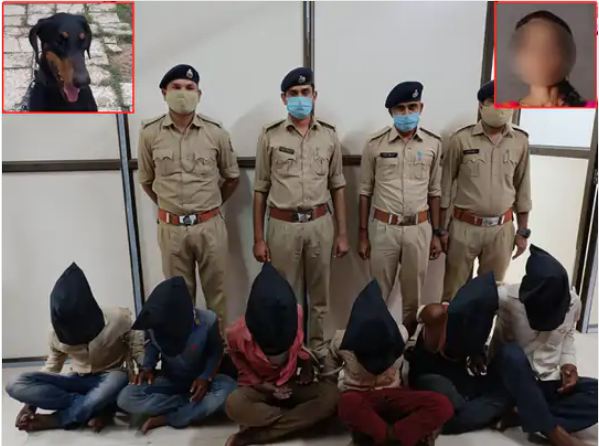 All 6 accused in police custody and sniffer dog ‘Java’ of Vadodara Police in inset and deceased.

A sensational case of gang rape and murder came to light in Dethan village of Vadodara district. In this case, the police have arrested 6 youths. However, Vadodara Police has got this success because of its sniffer dog named ‘Java’. Because, it was Java who had discovered that the accused were intoxicated by sitting nearby. After this, as soon as he reached the ‘Java’ settlement, he started barking at an accused.

The deceased, living in Dethan village, was working hard to feed her two children.

the victim had gone to cut grass
The woman living in Dethan village of Karjan tehsil had gone to the field to cut grass on August 16. During this, 6 youths who were intoxicated while sitting in the field, took them to the bushes and gang-raped her. Fearing being caught, the accused strangled the woman to death with her dupatta. Thereafter, the bodies were thrown into the bushes and fled. Let me tell you, the deceased is the mother of two children and was working hard with her husband to feed the children.

After the gangrape, the accused had strangled the woman to death with a dupatta.

When he did not reach home, the husband went out in search
When the woman did not reach home till nightfall, her husband looked around for her. On receiving no news, the villagers went out in search of torches. During this, the ring was going on the woman’s phone. Meanwhile, someone heard the ring tone of the mobile. After this, when people reached the spot, they saw the dead body of the woman and informed the police.

‘Java’ detects that accused were intoxicated nearby
The team formed under the guidance of DYSP Kalpesh Solanki started investigation with the help of squad and fingerprint experts. The most important role in this was played by Sniffer Dog ‘Java’. After smelling the dead body, Java took the police to the place where the accused were taking drugs while sitting. From this it came to know that the accused were taking drugs while sitting here. Just this information made the job of the police easier.

On seeing the accused started barking ‘Java’
After this the police team started to find out about the drug addicts. Meanwhile, information was received that some youths living in the nearby village township are intoxicated by drugs. Java’s help was again taken in this matter. When the police team reached to interrogate the drug addicts, they took Jawa with them. In the meantime, Java went to a drug addict and started barking and this was a clear signal from Java to the police. Simply, in this way Java put all the 6 accused behind the bars. The accused have also confessed their crime.

The accused had come to work in the railways.

According to the information received from the police, all the accused are residents of UP-Bihar and Jharkhand. Recently came to Vadodara for wages in Railways. The names of the accused are… Lal Bahadur Girjaram, Dilip Shrimukhlal Choudhary, Jaggu Prasad Pandu, Pramod Ramcharan Pandu, Ramsurat Subhashchand Pandu, and Arjun Lalchand Pandor.