Apple-laden pickup rolled into a ditch in Shimla: Two brothers killed, 15-year-old teenager injured in an accident near Lilu Bridge in Theog 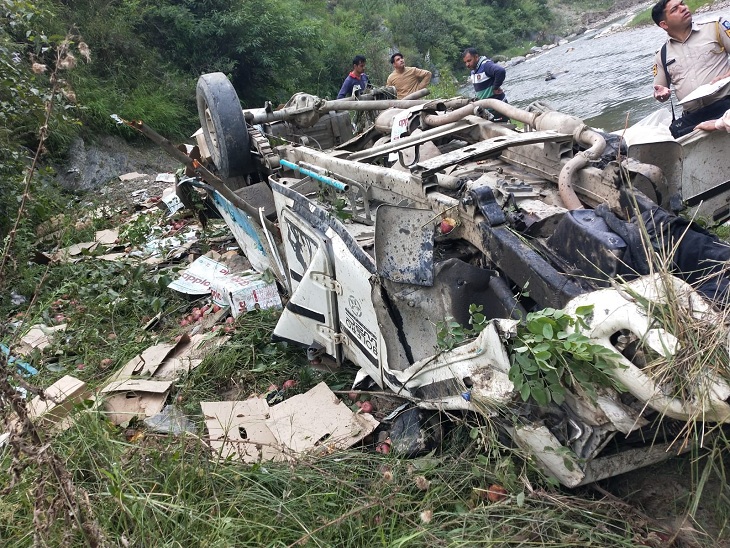 The pickup was blown up after falling into the ditch.

Two brothers have died in a road accident near Lilu Bridge in Theog of Shimla district of Himachal Pradesh. Because the pickup jeep laden with apple boxes went uncontrollably and fell into the ditch. A 15-year-old teenager has also been injured in the accident, who has been referred to IGMC after first aid at a local hospital. The police registered a case.

According to the information received, two real brothers and another youth were going to Mandi Shimla from Chaupal after loading apples in a pickup. They were to reach the fruit market early in the morning, but at around 4:00 am, driver Pratap Singh lost control near the petrol pump a little ahead of the Lilu bridge and the pickup fell into a deep gorge. As soon as it fell into the ditch, the pickup blew up and both the brothers died.

Local people reached the spot as soon as the accident was known. People informed the police about the accident. On receiving the news, the Theog police team reached the spot and rescued the victims of the accident from the ditch. The deceased has been identified as Pratap Singh, 33 years, Anoop Singh, 27 years old, son Kanshi Ram, resident of village Bagra Tehsil Theog, Shimla. The name of the injured is Deepak.