Bank robbery and murder in broad daylight: two robbers who entered the bank in Junnar area of ​​Pune shot the manager, the incident caught on camera 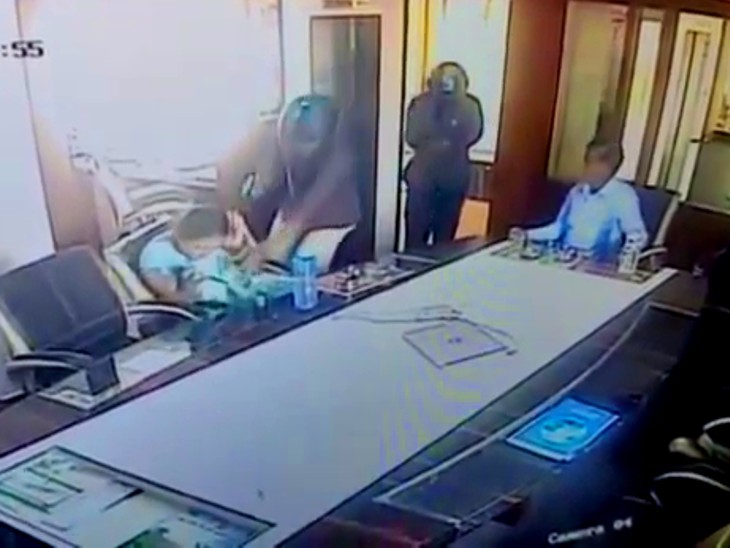 This incident of murder and robbery has been captured in the CCTV camera installed on the spot.

There has been a major robbery today in rural Junnar area of ​​Pune. Here two robbers entered a cooperative bank and robbed 2.5 lakh rupees kept in the bank at the tip of the pistol. The bank manager who was protesting the robbery was shot by a robber, killing him on the spot. This heinous incident of robbery has been captured in the CCTV cameras installed inside and outside the bank.

In the video that has surfaced, two robbers are seen coming on a bike. Both are wearing helmets. Both of them enter the conference hall of the bank with pistols in their hands, where Dashrath Bhor, manager of Anant Gramin Birgarsheti Co-operative Sanstha Bank, was talking with a female employee. The robbers first asked him to pay the money and when he refused, one shot him in the chest. Due to this he fell on the spot. As soon as they fell, the female employee tried to lift them, but the robbers showed them the pistol while intimidating them. After this, the accused fled from the spot with the bag full of money.

Both the accused were wearing helmets on their faces, so they are yet to be identified.

Police checking CCTV for investigation
Dr. Abhinav Deshmukh, SP of Pune Rural Police, who is probing the matter, said that the bank employees informed the police about this. After this a team of Pune Rural Police and Crime Branch reached the spot and started efforts to nab the accused. According to sources, it has come to the fore in the investigation that the accused have fled through the highway, so the police have got the number of their vehicle. At present, it is being investigated whether the number in the vehicle is real or fake. The police is checking the CCTV footage of the bank and the records of the people who have come here during the last few days.

After getting information about the robbery, a large number of people reached outside the bank on the spot and created a ruckus.

People created ruckus outside the bank
There is an atmosphere of panic in the area after this incident which took place in broad daylight. On getting information about the incident, a large number of people reached the spot and started a ruckus. The policemen somehow explained to him and sent him home.