Bhaskar Exclusive: The untold story of Rajkot’s ‘Indubhai’ behind the story of ‘Bhuj’, was reporting with soldiers in the 13-day war 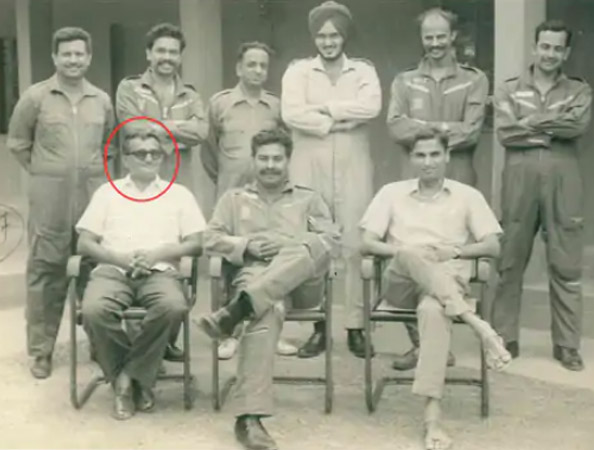 Ajay Devgan starrer film ‘Bhuj the Pride of India’, which showed the bravery of the women of Madhapar village of Bhuj district, has been released today. Pakistan had suffered a crushing defeat in the 1971 war. The countrymen are now getting a chance to see this history on the silver screen. However, the entire nation is unaware that the entire story in the midst of this war has come to the filmmakers from the reporting of Late Indubhai Joshi, former Deputy Director of Rajkot. Yes, it was Indubhai who stayed with the soldiers on the battlefield for 13 days. Between the bomb blasts, he wrote about every fact related to the war with his pen, which very few people know.

Wing Commander Vijay Karnik praised Indubhai
Indubhai had been in the field during the Indo-Pakistani War of 1965 and 1971. Ajay Devgn who plays the role of Wing Commander Vijay Karnik in Bhuj film told Dainik Bhaskar about Late Indubhai’s articles that Indubhai was an honest journalist. He wrote many episodes of bravery and sacrifice of Indian soldiers during the battle in Bhuj. Journalists don’t usually go to the battlefield, but Indubhai was with us. They were gathering all the information by taking photographs of each incident. At that time, bombs were being blasted everywhere, while Indubhai was fearlessly writing his report. The stories of the bravery of our jawans reached the people only through their reporting.

This happened because of the bomb dropped by Pakistan, the runway of Bhuj airport (which was also a military airport).

Captured on camera the valor of heroes
Vijay Karnik tells that during the war Indubhai used to make Dhokla for us from his home. Basically I am a Marathi person, but I was fond of Gujarat cuisine. I had specifically instructed my officers not to stop Indubhai to let him go whenever and wherever he wanted. Even when we were getting the runway built with the help of the brave women of Bhuj, Indubhai was with us the whole time and in his articles he wrote about all those women, how the women of Bhuj stood shoulder to shoulder with the soldiers in the midst of the bomb blasts. Standing shoulder to shoulder.

Women of Madhapar village repairing the military airport of Bhuj.

Important contribution of women of Bhuj
Actually, at that time Pakistan destroyed the runway of Bhuj airport (which was also a military airport). The bombs fell in the middle of the airstrip, causing huge potholes in many places. It would not have been possible for Indian aircraft to fly if the runway was not repaired in time. Such a situation had never come before, so no one had experience working in such a situation.

Eventually, the then Air Force Commander of Bhuj Airport, Vijay Karnik, called Kutch Collector N. Gopal Swami sought help. Gopal Swami took the responsibility of providing manpower to repair the airstrip and within a few hours an army of about 300 women from Madhapar village stood ready to help the Indian soldiers. The next morning, the women were gathered at the nearby village of Vathan, from where they were brought to the Bhuj airport. Women skilled in construction work brought with them all the tools like shovels and hammers.

The group of women was led by a woman named Sunderbehn, whose role was played by Sonakshi Sinha in the film.

Sonakshi Sinha has played the role of Sunderbehen
The group of women was led by a woman named Sunderbehn, whose role was played by Sonakshi Sinha in the film. The most amazing thing was that in just three days these women had prepared the entire runway. Indubhai has written about this that although women could complete this work in only 36 hours, but during the bombing of the Indian Army sirens, women had to hide under the acacia trees. Because of this, the work had to be done intermittently. The remarkable thing here is that Indian Air Force planes took off from this runway and blew up Pakistani tanks and within seven days Pakistan had conceded defeat.

Indian soldiers captured the village of Nagarparkar in Pakistan on 8 December, then photo.

Reporting of the Indo-Pak war in September 1965.
Late Indubhai was the District Information Officer in the Information Department, Government of Gujarat in 1961. Meanwhile, according to a special order issued by the Government of India in September 1965, foreign journalists were moved to the front lines of the Indo-Pak war. Due to this anti-India rumours were refuted. Indubhai then took many pictures of the war front and made the whole world including India aware of the correct facts from his report.

Reporting in the field instead of writing a press note
As an officer of the Information Department, Indubhai could have written a press note sitting in his room, but he did not. He himself used to stand directly in the battlefield with his pen and notebook, so that he could see every single incident. Not only this, when the bombs started falling from the Pakistan side in Bhuj, Indubhai was still standing with the Indian soldiers. His bravery makes him an honest journalist.

India occupied an area ranging from 1200 to 1400 km
Indubhai’s son and Deputy Director of Information, Rajkot Information Department Niralabhai Joshi has made a documentary showing the condition of soldiers of India and Pakistan in the Indo-Pakistani War. In a scene from the documentary, Indubhai said, “I remember it very well. On the night of 1 December 1971, Pakistan attacked India. I was reporting there at that time. From Khavda and Banaskantha of Kutch. There is a small desert of Kutch between Sui village and the distance between them is 200 km. Fighting was taking place in this small desert. Pakistan’s border is only 10 kms from Sui village of Banaskantha and Pakistan’s The first village is Nagarparkar. India attacked Nagarparkar and captured the village on 8th December. After this Indian troops occupied 1200 to 1400 km of Pak land. And I saw all this with my own eyes.”

Indubhai had deposited these remains of weapons during the war during his reporting.

The remains of weapons are deposited in the house
Late Indubhai’s son Nirala Joshi has preserved the remains of the bombs thrown by Pakistan in Bhuj during the 1971 war, besides the shells of machine guns. Indubhai had deposited this material during his reporting.