Bhaskar Explainer: How effective is the vaccine on the new variant ‘Omicron’? What did the WHO say? What’s a concern for us? 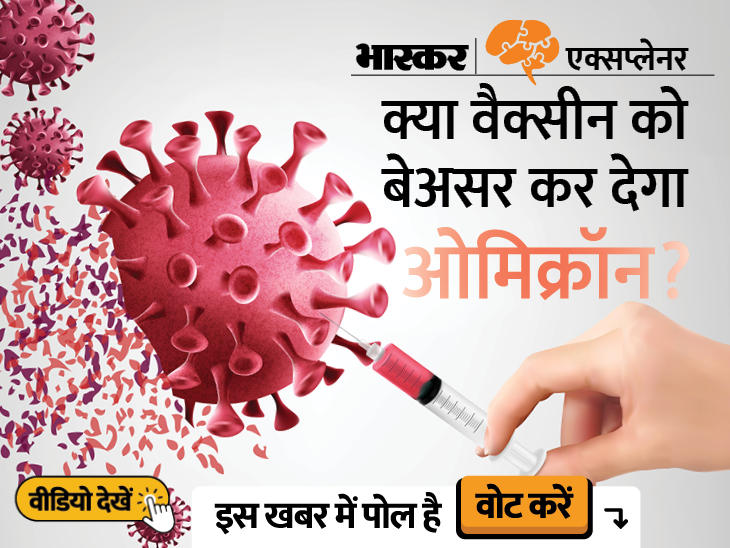 The new variant of Corona found in South Africa has stunned the world. Keeping this new variant of Corona in the category of Variant of Concern (VoC), WHO has named it Omicron. It is believed to be the most mutating variant of Corona ever. This is the reason why scientists are calling it ‘scary’. This variant has been described as more mutational and faster spreading than the delta variant that caused the second wave in India and the third wave in many countries of the world.

Let us know how effective is the vaccine against the new dangerous variant of Corona? How at risk are vaccinated people from this new variant? What has WHO said about this? How dangerous can Omicron be for India? And what preparations has India made to deal with Omicron?

What do we know about the new variant of Corona?

How effective is the vaccine against Omicron?

This is the reason that it is being feared that it is also possible that the vaccine may not be effective against the new variant of Corona.

What has the WHO said about the effect of the vaccine on Omicron?

Regarding the effect of the vaccine on Omicron, WHO Chief Scientist Soumya Swaminathan said in a conversation with Dainik Bhaskar, “There is no variant that makes the vaccine completely ineffective.”

‘If the body has antibodies due to the vaccine prepared for any variant of the virus, then it will definitely protect against the virus. The vaccine does reduce the firepower of each variant to some extent. But it cannot be completely neutralised. ” Therefore, people who have not yet been vaccinated should get it done without delay, because such people are at the highest risk of infection with Omicron.

Regarding the effect of the vaccine on Omicron, AIIMS Director Dr Randeep Guleria has said that due to more than 30 mutations in the spike protein of Omicron, all the current vaccines need to be immediately assessed against it.

How dangerous can Omicron be for India?

Cases of Omicron have also been found in people who were fully vaccinated. In such a situation, it can be a matter of concern for a huge country like India. So far, more than 1 billion 22 crore corona doses have been applied in India. Of these, more than 78 crore (56 per cent) people have received a single dose of corona, while 43 crore (32 per cent) people have received both doses of corona.

Only 32 percent of India’s population being fully vaccinated is a matter of concern for us. There are about 120 million people in India who have not vaccinated even after the date of the second dose has passed. The carelessness of such people can also prove to be dangerous with the arrival of a new variant of Corona like Omicron.

Who is most at risk from Omicron?

What preparations has India made to deal with Omicron?

In view of the seriousness of Omicron, the Government of India has started preparations to deal with it. PM Modi has held an emergency meeting regarding this new variant of Corona, while the Union Health Ministry has issued advisory to all the states regarding vigilance against Omicron.

In view of the threat of Omicron, the government has ordered strict screening and testing of passengers coming to India from all those places including South Africa, Botswana and Hong Kong, where this new variant of Corona has spread.