Jan 12, 2022 In2022, the government seems to be making a kind of agreement with Corona, the peak will be seen by mid-February. 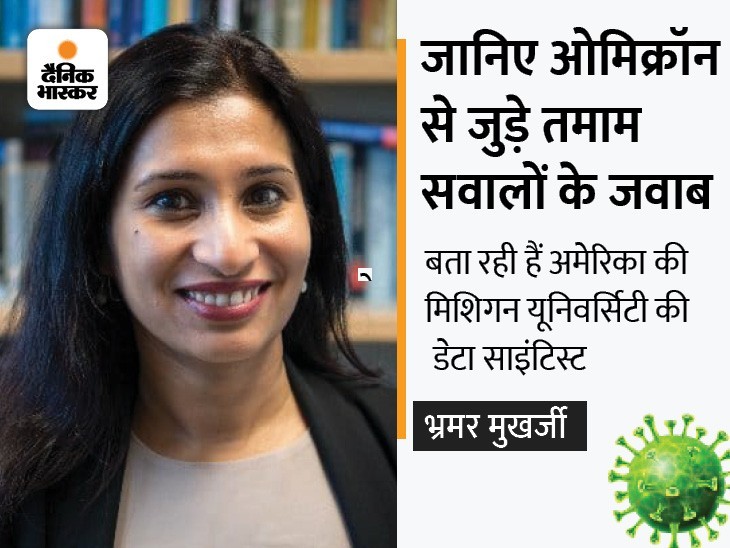 India is in the middle of Omicron’s third wave. The number of patients is increasing day by day. Many questions may be arising in your mind regarding this. For example, when will the peak of this corona come, will the vaccine keep us safe or not, how dangerous can Omicron be next? Regarding all these questions, Bhaskar reporter Poonam Kaushal spoke to Bhramar Mukherjee, a data scientist at the University of Michigan, USA.

When did the Omicron wave start in India, where are we now and what are the signs ahead?
In early December, after Omicron was found in South Africa, infections began to explode in the US and Europe. Even during the previous waves, it has been seen that this virus comes silently and then spreads rapidly.

To stop it or to make an effective strategy, we have to catch it when it is moving silently. Even when 6-7 thousand cases were coming daily, we were insisting on taking concrete steps. Then many people were saying that this wave will not come in India, but this wave had already arrived in India in December itself.

This virus is reaching a lethal level, a big reason for this is that steps are being taken to stop it when it has spread very much. India’s policies in response to Kovid have also been very different. We saw that the government imposed a strict lockdown in 2020, but did nothing in 2021. Now we are seeing that the government is doing some kind of hybrid compromise in 2022.

When will the peak of this wave of corona come?
Different peaks will come at different places in India. Peak can come in Mumbai, Delhi, Kolkata from mid to end January. The countrywide peak will come by mid-February, but that is just my guess.

According to the sero survey conducted in June last year, 70 percent of the country’s population had antibodies, that is, they had passed the infection. When we look at all these things together, then India’s immunity sheet looks completely different. Now the population the virus is attacking is more secure than before. Due to the vaccine, people are avoiding hospitalization and deaths are decreasing even in severe cases of infection.

Many experts are saying that the virus is now mild and the danger is low, what do you think?
Now many people have been vaccinated. Fewer numbers of people are being admitted to the hospital. If we look from this perspective, the virus seems mild, but when we say that the virus is mild, it means that it can be mild for some people, but can be very dangerous for some people. .

In this sense, the virus is mild, but if this virus is allowed to spread uncontrollably, then the number of people falling ill will become so large that our hospitals will be filled. This can ruin our health system. We are seeing the same thing happening in America.

How is the scientific community reacting to this wave? What are scientists discussing about this virus?
Opinion is divided. There is a section which is saying that this wave is very dangerous, everyone is going to fall ill. We have to take strict measures to stop the virus. At the same time, there is another class which is saying that they are not very dangerous, Omicron is a natural vaccine which is going to develop antibodies in people.

This group believes that Omicron will spread to the whole world and then this virus will end, but there is also a section of scientists who believe that the epidemic will not end with Omicron. A new variant of the virus may emerge as it is reaching new populations and we do not know whether the new variant will be milder or more dangerous. We know that we still do not know much about the virus.

Is lockdown the only way to stop the virus or can it be stopped without imposing a lockdown?
We may not impose a strict lockdown like in 2020, but we as a society have to face the virus in a safe way with more confidence. Governments around the world will have to take massive steps. At least seventy percent of the world’s population will have to be given the vaccine.

As far as India is concerned, those who are waiting will have to apply the second dose at the earliest. The class most likely to be affected should be given a booster dose. Apart from this, the government should ensure that there is no overcrowding, especially in indoor places.

In America, the focus is now on being open rather than on lockdown. Governments should insist on how to keep things open in a safe way. We should move towards being open and not towards being closed.

Things can be kept open when the infection is less. When data shows that the infection is about to increase, then more vigilance and caution should be taken. The data that we have shows that people have been protected from the vaccine. In such a situation, emphasis should be placed on immunization of the world population.

What do you think is the most important step in the fight against the virus and what should governments do?
The most important role in fighting against the virus is that of leadership. We have to fight this virus by taking science and compassion together. Opinion is divided regarding the virus. Some people also want a lockdown, but there are also voices who want that people’s livelihood should also be taken care of.

Self testing should also be encouraged in India. The government should provide people with kits to test them. When people come to know that they are infected, they themselves will keep themselves away from others.

When we say that Omicron is mild, isn’t it indicating that the virus will go away on its own and we need not fear?
The virus may be considered mild, but steps have to be taken to avoid it. If one person in the family falls ill, there are others to take care of him, but if everyone falls ill, who will take care of him?

Omicron is very contagious. If one member of the family is infected, then the risk of infecting the rest of the family automatically increases. Not all of us can afford to get infected at the same time.

If all health workers, workers, or household workers get infected, then the health system, the social system will be shattered. Healthy people are less likely to be hospitalized if they are infected.

When we talk about India do you think we have enough information and data publicly available about Omicron and Covid wave?
The data we have in India is very simple. We get data from the ministry on daily infection cases, recoveries and deaths, but what we need most right now is to track hospitalization cases. Some states provide data on hospitalization, but not all states are able to do so. Data on hospitalizations related to Kovid is not available at the national level.

The data we have related to hospitals is also from big cities. We don’t know at what level the epidemic is spreading in rural areas, because we don’t have enough data to track them. We feel that the exact number of deaths has not been recorded.

I think the better and more data we have, the better decisions we can make. Public confidence will also increase. For example, Israel, Britain and the Netherlands have created such a data system, which can be used to assess the effectiveness of the vaccine. India also needs to build a better data system at the national level.

What do you think we are doing wrong in our response to this wave from Omicron? How would you assess India’s response?
Initially it was confused that Omicron is lightweight. There were mixed messages from the scientific community and policy makers as well. There was no clarity. Many people were saying that this will build herd immunity and end the epidemic, but now we know that this will not happen.

The data we have in front of us shows that Omicron will not end the pandemic. We may have to apply a booster dose. Maybe a new variant will come ahead and for that we have to make a new response system. We have to track hospital data. The response system will have to be developed according to that data. We have to decide what we will do when 50 per cent beds in our hospitals are filled. What will we do when we are 100% full? There should be a clear plan and the public should be aware of it. If we don’t know something, then the public should know that too.

What is the effect of the virus on children, what do the data say?
Children are getting infected in Omicron’s wave, but as far as death data is concerned, even children who have not been vaccinated are showing fewer deaths. This data is encouraging. Data from other countries shows that the impact on children has been mild, but we have to reduce the risk by all means and save every life. In such a situation, we have to take precautions.

Elections are going to be held in five states, the Election Commission has stopped political rallies for a few days, what is your advice?
It is clear that where there is a crowd there will be a higher risk of infection. Political parties should emphasize on virtual and digital campaigns. The election was held in America amid the second wave of Kovid. People were given the option to vote from home. Elections are essential for democracy, but one must think about how to find safe ways. That politics will be the worst politics which promotes the pandemic.