Bus hanging in the air on Sundla-Telka road in Chamba: Accident happened while trying to save bike; There were 12 passengers in the bus, the driver’s understanding saved lives 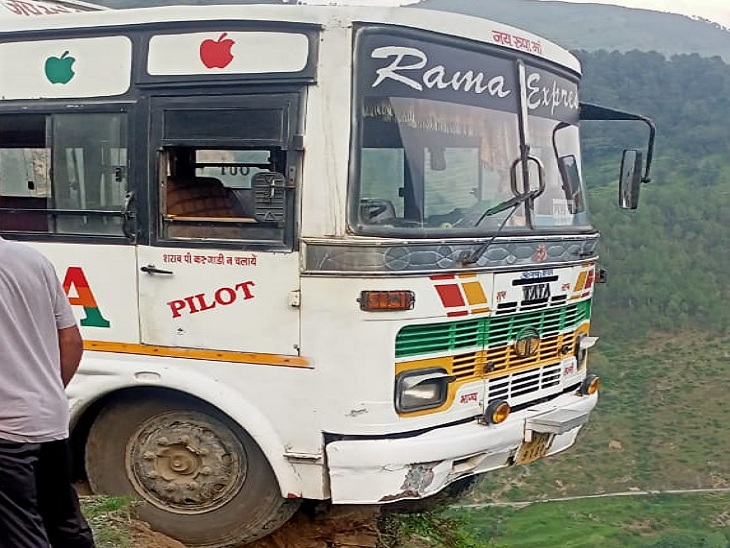 Bus hanging on the bank of a ditch in Chamba.

A major bus accident was averted on Sundla-Telka road in Saluni sub-division of Chamba district of Himachal Pradesh. On Friday evening, a private bus from Sundla was going towards Telka. It is being told that when the bus reached the black turn near Telka, it started passing the bike. During this, a bike also came from the front.

In such a situation, the bus became uncontrollable in order to save the bike, which the driver saved from accident with understanding. People say that the place where the bus hung in the air, there was a very tight space. In such a situation, due to the tight space, when the bike came from the front, the front tires of the bus went off the road in an attempt to save it.

When the bus hung in the air, about 12 passengers were present in it. There is a deep moat on the lower side from the black bend. Had the driver not acted wisely, a major accident could have happened. The passengers were safely ejected from the bus after the bus hung in the air. After this, the work of pulling the bus with the help of a truck started.

If the bus did not hang in the air or was moving with high speed, it could have fallen directly into a deep gorge, which could have killed the driver and the operator along with the passengers.

Corona losing elections in Punjab: 10% recovery rate increased to 78% in 11 days at the time of election announcement; Polls revealing deaths

Bhaskar Analysis: Third wave of corona in the country nearing peak, yet only 2 out of every 1000 patients die