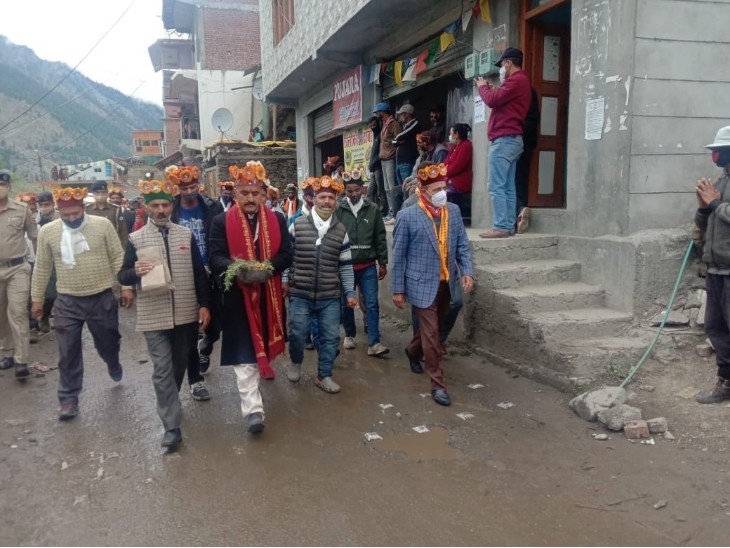 Chadi Yatra has started from the historic Pauri fair in Kullu, Himachal Pradesh on Sunday. During this, the Minister of Technical Education, Tribal Development and Information Technology, Dr. Ramlal Markandeya attended the Pauri Mela organized in Triloknath on the occasion of worship and fulfillment of ancient traditions.

He explained that Trilokinath temple is worshiped by both the communities as Lord Shankar and Avalokiteshvara as the center of Buddhist and Hindu faith. Similarly, this place of Lord Shiva is also believed to be related to the holy Manimahesh since ancient times. On this day a batch of devotees leave for the holy Manimahesh Yatra which reaches Manimahesh by crossing the Kugti holding. Every year a batch of devotees travel to Manimahesh in the same way, which leaves from here on the concluding day of the Pori fair and reaches Manimahesh holy lake after five days of foot march.

This tradition has been going on since ancient times, which is followed with the same faith even today. Dr. Markandeya said that fairs are an important part of our culture. Pauri Fair is a very ancient and historical fair here. This time when every cultural and religious event is being organized in a subtle way due to the corona pandemic.

In such ancient festivals and fairs, following the standard operating procedure, only the ancient traditions are being followed. Even in organizing the Pauri fair, only essential ancient traditions are being followed. Dr. Markandeya offered prayers at the temple along with the Lama of Triloknath temple and people associated with the deity tradition here and the group going on Manimahesh Yatra was flagged off with the cheers of Lord Trilaknath.