Chartered flight ticket given by mistake in the system: Not allowed to board the flight even after having a boarding pass with the ticket 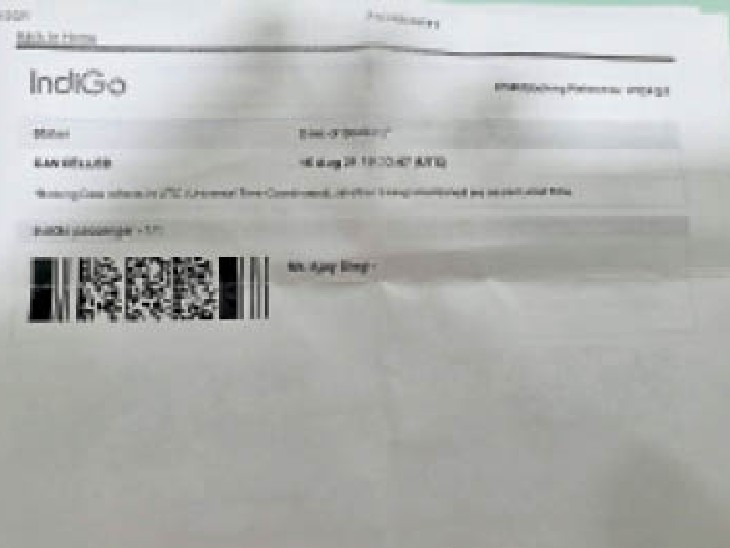 At Surat airport on Tuesday afternoon, the airline Indigo canceled the Delhi flight ticket after booking it. The passenger had taken out the boarding pass, yet he was refused to travel by air. Passengers are now preparing to go to consumer court. IndiGo management said that the ticket was booked on our chartered flight due to system error. The matter was that on Tuesday, businessman Ajay Singh had to go to Delhi for a meeting.

He booked an Indigo flight ticket for Rs 7300 in Urgent on Monday night to go to Delhi. This flight was on Tuesday afternoon at 1:30 pm. He had applied for boarding pass online. Indigo management also gave him a boarding pass. He reached Surat airport with his luggage in the afternoon and when he went to check-in, the IndiGo staff said that you will not be able to travel today, as the flight for which you have a ticket has already been booked as a chartered flight.

Instead, you can get a refund. Passenger Ajay Singh told that I had a business meeting at 3:00 pm. It was mandatory to reach Delhi. Senior officials were not allowed to travel despite repeated requests. I spoke to their headquarters also, but they did not allow me to travel.

Indigo said – the ticket was booked due to system error
IndiGo said that it was our chartered aircraft. It was booked by a special group. Due to a fault in the system, this flight was showing in our system. With this the passenger has booked the ticket. When we verified, it was found that the PNR number of the ticket has gone to the chartered flight. As per the protocol, they could not travel in this chartered plane. Indigo told the passenger that if you want to go early, you can go by evening flight.

Passenger: I lost lakhs, I will recover the damages
On this arbitrariness of the airline Indigo, passenger Ajay Singh told that my meeting was canceled. There has been a loss of lakhs, so I am not going to give up so easily. I will expose their arbitrariness. I have talked to my lawyer. I will go to consumer court against Indigo and collect the damages.