Chief Minister Jai Ram Thakur hoisted the national flag in Mandi: The flag was hoisted despite the threat of Khalistanis; 15 crores given to District Municipal Corporation, Announcement- Dearness allowance will be available from July 1 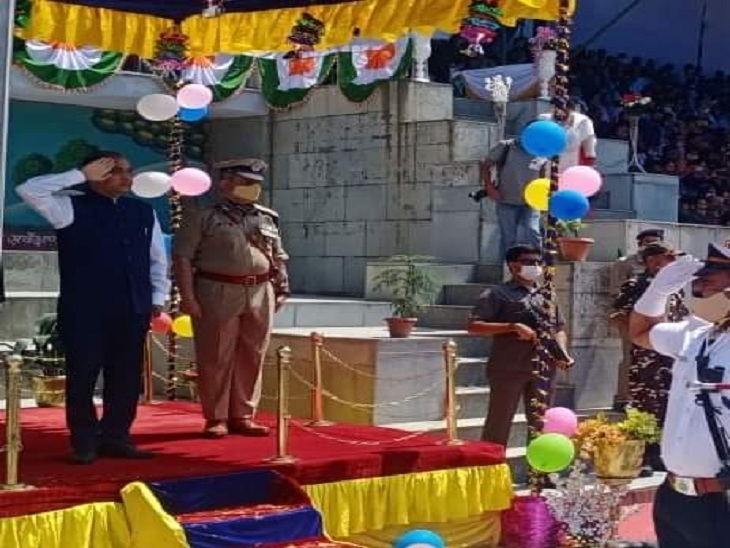 75th Independence Day program was organized in Mandi district of Himachal Pradesh. Chief Minister Jai Ram Thakur unfurled the flag and took the salute of the parade. The Chief Minister also addressed the people. He said that a provision of Rs 15 crore would be made for Mandi Municipal Corporation. This money will be given to Mandi Municipal Corporation in two installments.

He said that it is a matter of pride for our country that medicine was made in the country to protect against Kovid-19 and 135 crore people are being vaccinated. The world’s largest vaccination campaign is going on in India. If any state is doing better work in Jal Jeevan Mission, then it is Himachal Pradesh. For this the Minister of Jal Shakti Department deserves congratulations.

Dearness allowance will be available from July 1

The Chief Minister said that 6 percent installment of Dearness Allowance would be given to all the employees and pensioners. This will benefit 4 lakh employees and pensioners. 450 crore will be given. In edible oil also, the government has extended the subsidy for the next 4 months. In such a situation, the 10 rupees that BPL used to get is made 30 rupees, while the 5 rupees given to APL, it has been increased to 10 rupees.

Restrictions will be imposed if the cases increase

Chief Minister Jai Ram Thakur said that if the cases of corona infection increase in Himachal, then some restrictions will be imposed in the coming time. In such a situation, he hopes that people will get cooperation. Because the way the outbreak of infection is increasing, it is very important to control it. In such a situation, some strict steps may also have to be taken.

Tricolor hoisted amidst threat of Khalistan

The Chief Minister was constantly being threatened by the pro-Khalistan Gurpatwant Singh Pannu for not hoisting the tricolor on Independence Day, but in spite of that he hoisted the tricolor in Seri of Mandi. Tight security arrangements were made here by the police. Snipers were deployed at 35 places. Apart from this, more than 500 soldiers were deployed.