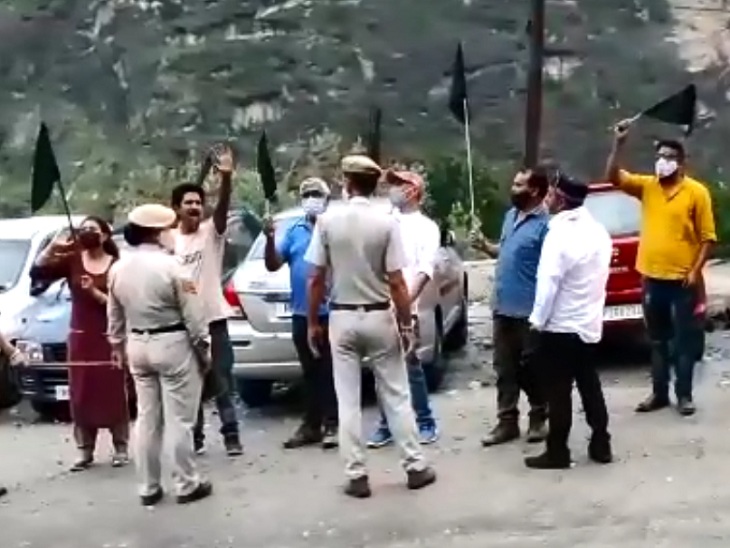 Panchayati Raj Development Minister Virendra Kanwar, who was on his way to Kinnaur to preside over the Independence Day celebrations on August 15, faced protests on the way. Congressmen showed black flags to the minister and also raised slogans of Go Back. Congress workers say that the minister has insulted the tribal MLA and the tribal people in the Vidhan Sabha.

It is noteworthy that during the monsoon session of the Legislative Assembly, there was a heated argument between Panchayati Raj Minister Virendra Kanwar and Tribal Congress MLA Jagat Singh Negi. There is a lot of anger in Kinnaur Congress regarding this. When the minister left for Reckong Peo on Saturday, slogans of Virendra Kanwar Go Back were raised and black flags were waved at all entry points including Kinnaur’s entry points Bhavnagar, Nigulseri, Chora, Tapri.

There is a lot of anger among Congress workers and office bearers regarding this matter. Although police personnel were present on the spot, black flags were shown to the minister in spite of that. Then the minister was taken to Kinnaur under a tight security cordon. Congressmen have said that after the accident in Nigulsari, there is resentment among the people due to the negligence of the administration and the government in taking out the dead bodies.

There is anger among the people that due to the lack of sensitivity and understanding in the government, the way the operation to rescue the people buried under the debris is going on from the very first day, it seems that the operation was started in a wrong way, in which if any If there was hope of being alive, then that too was over. Now the situation is such that even for 5 days the administration has failed to take out the dead bodies.