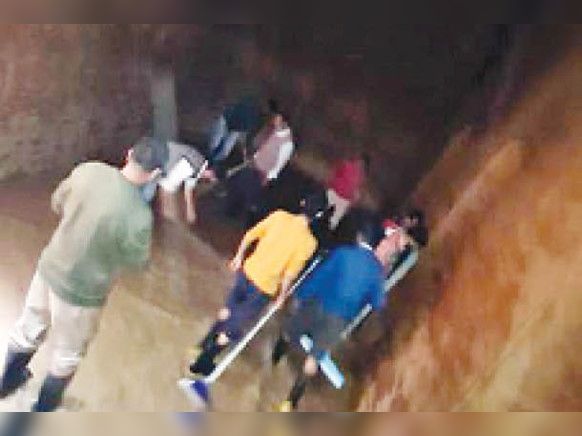 The drinking water tank on the ridge was cleaned by SJPL personnel on Wednesday.

The SJPL employees cleaned the drinking water tank at Ridge Ground on Wednesday. The water in the tank was very dirty. Due to this, it was cleaned on a routine basis. This water storage tank built during the British era was built 110 years ago. 10 arc shaped chambers have been made in the tank, in which water is stored. This 10 meter height tank can store 5 MLD i.e. close to 50 lakh liters of water in 10 chambers and it is the second largest water storage tank in the city.

The water from the tank is drained near Rivoli and the water from the Ruldubhatta drain later goes to the Sutlej. Whereas water from Lower Bazar side gets into Yamuna river after getting into Ashwani Khad. Water is supplied from this tank in core areas like Mall Road, Lower Bazar, Rambazar, Bus Stand, Krishnanagar, Kaithu, Lakkar Bazar, Anadale.

Mayor and Deputy Mayor were also present: Mayor Satya Kandal and Deputy Mayor Shelendra Chauhan were also present during the cleaning of the tank on the Ridge. Mayor Satya Kaundal says that there is a plan to get the four chambers of the tank repaired. For this, a budget of Rs 40 lakh is with Shimla Water Management. Due to this, instructions were also given to get the repair work of the chambers whose work could not be done earlier.