Contemplation about the re-increasing infection of Corona: Director of PGIMS gave instructions by calling an emergency meeting, 5 lakh 45 thousand 941 people have been vaccinated in Rohtak district; Now only 4 cases active 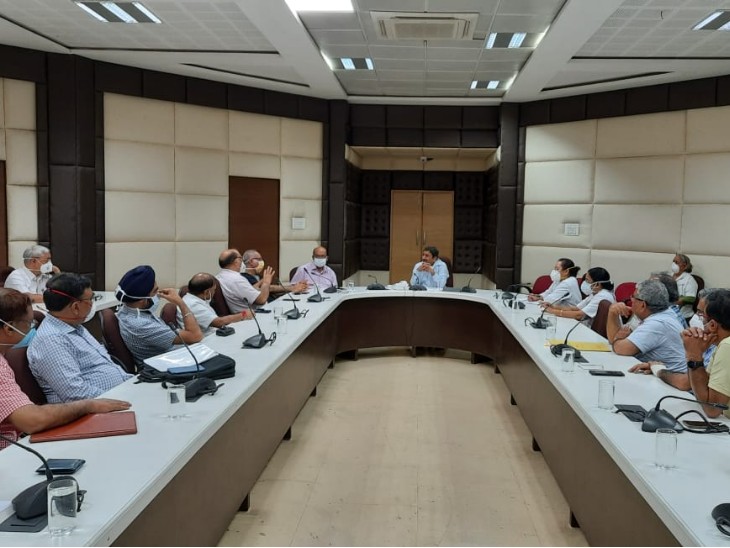 Suddenly once again the cases of corona have started increasing in Haryana. In view of this, on Tuesday, Dr. Rohtash Yadav, Director of PGIMS, called an emergency meeting with the doctors of all departments related to Kovid in the Swarn Jayanti auditorium of the Vice Chancellor’s office and gave necessary directions. It is a different matter that corona infection is continuously decreasing in Rohtak district. At present, only cases are active, while so far 5 lakh 45 thousand 941 people have been given the vaccine in the district.

Dr. Rohtash Yadav, Director, PGIMS said that suddenly the cases of Kovid have started coming once again and in such a situation, being such a big health institution of the state, we have to be prepared in advance to deal with any emergency, Due to this, calling this emergency meeting today, all the necessary guidelines have been issued by fixing the duty of all the officers. Dr. Yadav said that in view of the past experiences, all the shortcomings should be removed promptly. He said that in the first phase, C-block has been kept as a Kovid Troyes Area and if needed, the Trauma Center will be made a full-fledged Kovid Hospital in the second phase. He said that it would be his endeavor that the patients should not be allowed to face any kind of shortage. Dr. Yadav said that the relatives of the patients should not face any kind of problem later, so that this time the responsibility of file management will be given to the nursing sister. He said that soon the time of Kovid test sampling will also be extended.

Currently 4 active patients of Kovid-19 in the district
Today 944 samples of Kovid-19 were sent for testing, out of which one sample was found positive, while the result of 445 samples is yet to come. According to the data till date, 495662 persons have been kept on surveillance in the district, including those who came in contact with the infected.

So far 4 lakh 97 thousand 146 samples of Kovid-19 have been taken in the district, out of which 25888 samples were found positive and 4 lakh 70 thousand 813 samples were found negative. Out of these, 25318 people have recovered and gone to their homes after treatment. At present there are 4 active patients of Kovid-19 in the district. These active patients are taking treatment of Kovid-19 in home isolation. Medical kits have been distributed by the district administration to the patients living in confinement in their homes, which include essential health equipment, medicines and medicines and decoctions to increase immunity.

DC said – people should not be careless
DC Captain Manoj Kumar said that the cases of Kovid infection are decreasing continuously in the district and the people of the district should be alert for the future and do not be careless. All the residents of the district should make covid proper behavior a part of life. They should always use masks, follow the social distance of 2 yards. Clean your hands frequently with hand sanitizer or soap and water. Do not be a part of the crowd unnecessarily and avoid going to tight markets. Voluntarily follow the covid instructions issued by the government. All these instructions have been issued keeping in view the health of the general public.