Corona infection: The effect of not handling in the first 13 days of the year, 204 cases were found in the district after 262 days, the number of cases crossed one thousand 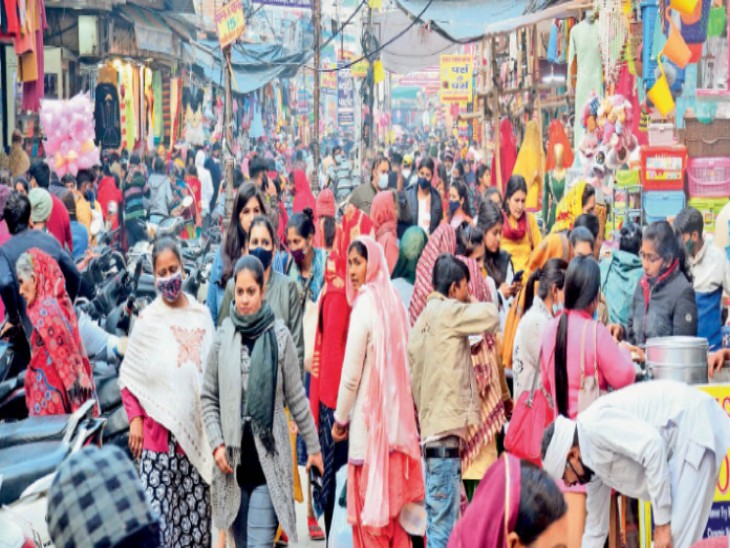 Crowds of townspeople gathered to shop at Qila Red Bazaar. Most of these people are not wearing or wearing masks or are wearing incomplete ones.

Now the government should take care of it! Things are constantly getting out of hand. On January 1, the district with only 28 cases was pushed into the Red Zone by the authorities and now the community spread of Corona has become such that record breaking cases have started coming. The corona cases in the district after 262 days have reminded of the painful conditions of the second wave. For the first time in the new year, 204 cases have been reported simultaneously. In the second wave last year, 150 cases were reported on 26 April 2021 and 259 on 27 April.

Now in the third wave too, after 101 cases on January 13, 204 cases have come positive on the day of Makar Sankranti. Meetings in festivals have started having an effect on corona cases. Those responsible for stopping the corona virus have not been able to do anything. Those responsible have even failed to convert the corona virus into community spread and stop movement from other districts. Even now people are coming from other states and giving speed to the virus infection.

The previous wave had increased at a rate of 1.8, but has now risen at a frightening pace of 2.2 per cent in a span of one day. If this fierce form of Corona continues to grow at this speed, then soon it can take an even more terrible form. In the previous wave there were 1205 active cases on 27th April on the bullish day and now there are 1045. Even this cannot be called a significant difference. Because the way the pace has picked up faster than the last time, this difference can also be erased in a few hours. The worrying thing is that both Omicron and Delta viruses are gaining momentum in the third wave. Whereas in the second wave only the outbreak of Delta was there.

Every 8th person corona positive in 1656 samples in a day
A record 204 were found infected on Friday. This is the highest figure ever. Whereas in the last seven days, only a little more than 100 cases have been reported. The frightening thing is also that for a total of 1656 samples, every eighth case has been found positive. The number of samples has also been the lowest in the last seven days except on January 9.

The surprising thing is that the health department has not been able to make arrangements so fast. It is very difficult to arrange more extra beds in the department and PGI. Now the number of active cases in the district has also increased to 1043. 1038 people living in home isolation are trying to get rid of corona. The positive rate has gone up to 4.24 percent. The recovery rate has come down to 93.97 percent.

45 health workers and 10 doctors found infected
Infection in PGI is spreading rapidly. On Friday, 10 doctors from different departments were found infected. Also 45 health care workers were found positive. Apart from six staff nurses, workers of many departments are included. At the same time, the health department offices are not untouched by Corona. Despite the claim of extreme protection, three employees got infected here. Apart from this, Corona has taken students, businessmen, businessmen, housewives, farmers, advocates, people from all classes of government or non-government employed in JD.

Advisory issued: If there are symptoms of Karena, then get treatment in the Trauma Center: Corona patients were admitted to the Dhanwantri Apex Trauma Center of Pandit Bhagwat Dayal Sharma University of Health Sciences. Its ICU has 27 beds and four are admitted. There are 35 beds in the triage area and four patients are admitted. All 45 beds on the third floor are currently vacant. Medical Superintendent of PGI, Dr. Ishwar Singh told that the Kovid patient can come directly to the trauma center and get his treatment. Any Kovid-19 positive patient who does not reach any other part of PGIMS for treatment, due to which there is a risk of infection to other people, he can come directly to the trauma center and get himself treated.