Corona Vaccine’s Connection to Menstruation: Are Your Periods Late After Getting the Vaccine? According to new research – this delay is temporary 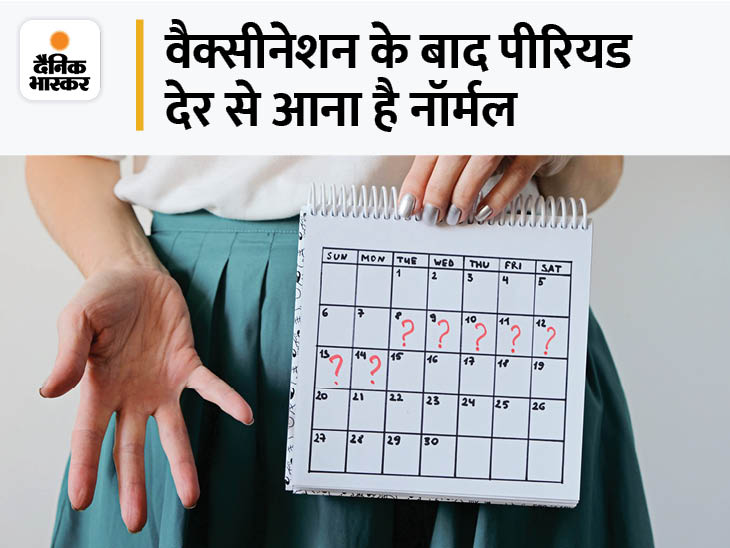 If your periods have started coming late after getting the corona vaccine, then you are not alone. A lot of women like you are facing this situation. To understand this connection of menstruation and vaccine, recently, a research has been done by Oregon Health and Science University of America. According to scientists, this is completely normal after vaccination. There’s nothing to be alarmed about.

Research done on American women
Scientists studied data from American women through a fertility tracking app. These women ranged in age from 18 to 45 years. She was neither using contraceptive drugs nor was she pregnant.

Of the 2,403 women involved in the research, 55% received the Pfizer vaccine, 35% the Moderna vaccine, and 7% the Johnson & Johnson vaccine. Apart from these, there were about 1,556 women who were not vaccinated.

According to scientists, one should not panic if the period is late after vaccination.

During the research, 3-3 period cycles were followed before and after the vaccination of women. During this 6 period cycles of the unvaccinated group were also followed.

Delay in periods after vaccination is temporary
Scientists found that women’s period was 0.64 days late after getting the first vaccine. At the same time, when the second vaccine was administered, the period was delayed by 0.79 days. For women who had not been vaccinated, their period came at their normal time. There were also 358 women in the vaccinated group, whose period cycle increased by 2.38 days.

According to the researchers, by the 6th period cycle, the difference between the periods of vaccinated and unvaccinated women had disappeared. This means, it is temporary to have a change in menstruation after getting the vaccine.

Scientists say that there is no concrete reason why menstruation is delayed after vaccination.

Why do periods change after vaccination?
Scientists say that there is no concrete reason why menstruation is delayed after vaccination. According to her, the vaccine strengthens our immune system, which can have a direct effect on the hormone-regulating system of women. Apart from this, stress at the time of corona epidemic can also be a reason for this.