Cruelty like Taliban in Gujarat: After talking to the women of other society, the woman was openly beaten with kicks, bribes and sticks, dragged on the road 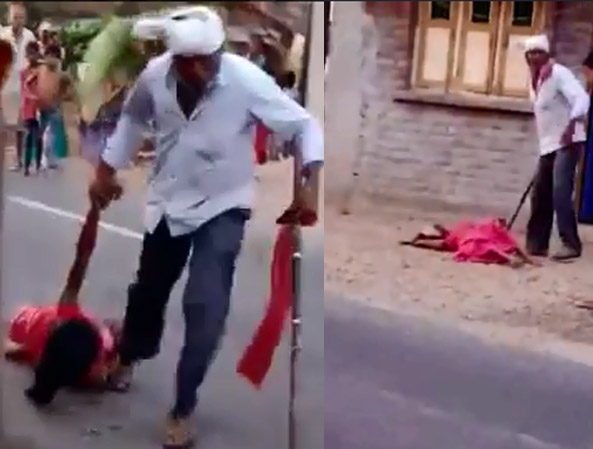 When the woman fainted after the beating, the family dragged her and threw her on the roadside.

A case of cruelty to a woman has come to light in Dahod district of Gujarat. Here the family members beat up the woman in such a way that the infamous organization Taliban of Afghanistan does. The only fault of the woman was that she used to talk to the women of other society.

In the photo, members of the family beating the woman with sticks and sticks.

The incident is from Fatepura village of Dahod district. Here the fight between Valvai society and Bhabhor society has been going on for a long time. A 50-year-old woman from Valvai society used to talk to a woman from Bhabhor society. The woman’s family objected to this. Angered by the woman’s talk, the family beat her with kicks, punches and sticks on the middle of the road, and then dragged her on the road. Some people present on the spot recorded the video and made it viral on social media.

The accused family beat the woman so much on the middle of the road that she fainted.

When the woman became breathless after being beaten up with sticks, the family members threw her on the roadside.

Police said, the family was angry about talking
Dadod police said that the woman was indecency only because she used to talk to the women of Bhabhor society. His family did not like this thing and they repeatedly forbade him to do so.