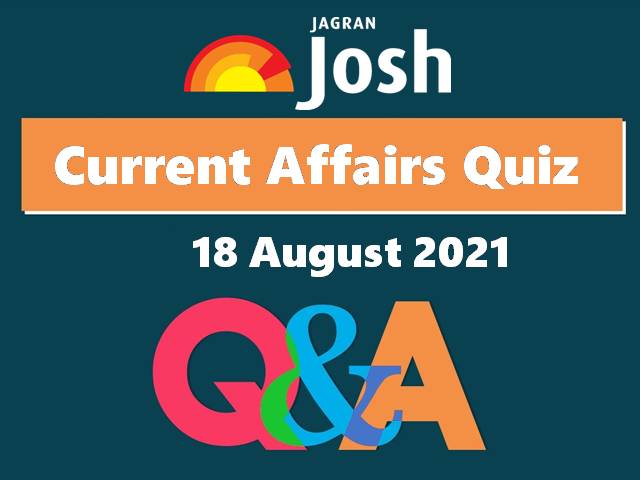 18 August 2021: The Current Affairs Quiz section of Jagranjosh aims to help every competitive exam aspirant to revise Current Affairs of the day at ease. The day’s updated Current Affairs quizzes cover topics such as renaming of Aligarh, Smart Health Cards and Caretaker President of Afghanistan among others.

2. Which city’s zila panchayat has passed a proposal to rename the city as Harigarh?

3. The Reserve Bank of India has partially lifted its digital ban from which private bank?

4. Who has declared himself as the caretaker president of Afghanistan?

5. A proposal has been passed to rename which Uttar Pradesh city as Mayan Nagar?

6. Which state has become the third one to present a separate agricultural budget?

7. Which nation has stopped development aid for Afghanistan?

Odisha Chief Minister Naveen Patnaik announced Smart Health Cards under the Biju Swasthya Kalyan Yojana for 3.5 crore people in the state after hoisting the National Flag on the occasion of 75th Independence Day on August 15, 2021.

The Aligarh Zila Panchayat has passed a resolution seeking to rename Aligarh as Harigarh. The proposal has now been sent to the Uttar Pradesh government, which will take the final decision.

The Reserve Bank of India (RBI) on August 18, 2021 partially lifted the digital ban on HDFC Bank. The move has allowed the bank to start issuing new credit cards again.

Afghanistan’s First Vice President Amrullah Saleh declared himself as the legitimate caretaker President of Afghanistan on Tuesday, 17 August 2021. Saleh announced that he is in the country and vowed a new fight with the Taliban.

The Mainpuri Zila panchayat passed a resolution on August 16, 2021 seeking to rename Mainpuri as Mayan Nagar after sage Mayan who founded the present day Mainpuri.

Germany has stopped development aid for Afghanistan. Development Minister Gerd Mueller said in an interview that state cooperation on development is suspended for the time being.