Darshana meeting with BJP leaders: Union Minister said – The goal is to fulfill the responsibility given to the PM and work among the people 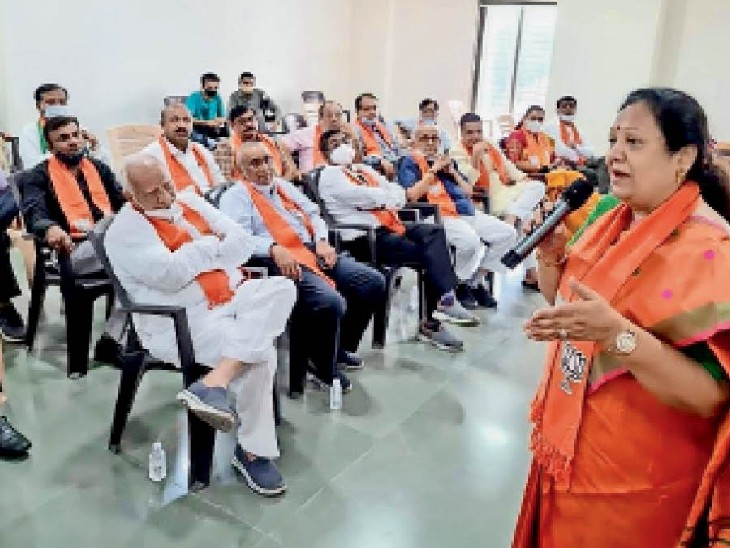 The Minister of State for Railways and Textiles held a meeting with the leaders in the BJP office. During this, he also took blessings from many senior leaders.

On Wednesday, Union Minister of State for Railways and Textiles Darshana Jardosh held a meeting with the leaders of the city BJP after performing a show of strength in the Jan Ashirwad Yatra on Tuesday. During this, blessings were also taken from senior leaders. Darshana also discussed about the journey from becoming a minister till now and the work to be done in the coming days. He said that when Prime Minister Narendra Modi called him to Delhi, he did not even realize that he would be made a minister at the Centre.

After reaching Delhi, when I took oath as a minister, it was only then that I had decided that the responsibility given by the Prime Minister by trusting in me has to be discharged with full honesty. People are coming with problems and suggestions related to textiles and railways. Efforts will be made to provide maximum facilities to all. Apart from Surat, people are also coming from other cities and states with issues related to textiles.

Today the traders of the textile market will honor the Union Minister
Textile traders have organized a reception on Thursday after MP Darshanaben Jardos became the Minister of State for Textiles and Railways in the Government of India. According to FOSTA, a felicitation ceremony has been organized on Thursday at Hotel Tax Plaza, STM Market, Ring Road at 5 pm. In this, along with Fosta and other market associations, other organizations will also honor Darshana.

Distribution of food grains to the needy people in Vesu
Under the Jan Ashirwad Yatra, Darshana Jardosh distributed food grains under the Pradhan Mantri Garib Kalyan Anna Yojana in Vesu at 11 am on Wednesday. He told the people that whatever ration card holders are in your contact, ask them to get free food grains.