Deadly action of traffic police: The bike parked on the roadside was lifted by the crane along with the rider, the person hanging in the air kept pleading to leave 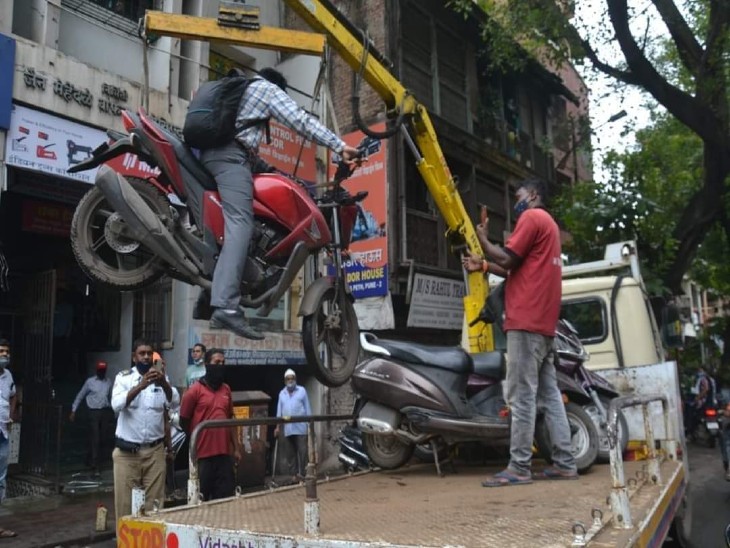 It is alleged that this person hanging in the air went a long way. After its video surfaced, an inquiry has been ordered into the matter.

A very surprising case has come to light from Nana Peth area of ​​Pune. Here a bike parked on the side of the road was taken away by towing (lifting) the people of the traffic department along with the rider. Traffic department officials have ordered a probe into the matter after pictures of the incident, which took place at 5 pm on Thursday, surfaced on Friday. However, the traffic department said that the bike was parked in a ‘no-parking’ zone and the rider deliberately sat on it while towing.

After the pictures of this incident surfaced on social media, people are now expressing their displeasure over the way the traffic department works. During which the bike rider was being picked up by the traffic department, he was saying, ‘Sir, my bike is not in no-parking, I was standing on the side of the road for two minutes. I have not parked my bike, I am leaving immediately, please do not take action against me. The allegation is that despite saying this, the people of the traffic department did not listen and picked up the person with the bike.

The person kept on repeatedly saying that he had not parked the car in no parking, yet the traffic police personnel did not listen.

misbehaved with the one who shot the video
After the video of this incident surfaced, people are now asking the question that even if the mistake is of the young man, is it right to lift him with the bike in this way. Who would have been responsible if he had fallen? There is also an allegation regarding this matter that the person who was shooting it was also misbehaved by those who picked up the vehicle.

Local people are also upset with the traffic department
Eyewitness Abhijeet Dhawale, who was present on the spot, said, ‘The traffic police in Nanapeth area is continuously harassing the common citizens. They pick up the car in front of our shop and after giving and receiving something, they leave the car and leave immediately. DCP Shriram of the Traffic Department said, ‘We have summoned the detail report of this incident in Nana Peth area. If anyone is found guilty in its investigation, then strict action will be taken against him.