Demand for removal of Himachal Speaker Vipin Singh Parmar: Congress submitted a proposal to the Assembly Secretary, said Speaker is behaving like being tied to a particular party 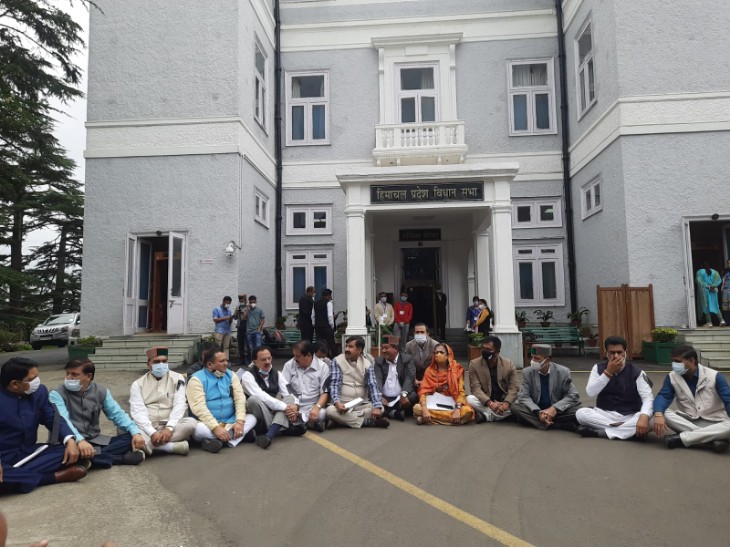 Congress MLAs sit on dharna outside the gate of the Assembly in Shamila.

All is not well in the Himachal Pradesh Legislative Assembly. Here the Speaker of the Legislative Assembly is being accused of step-stepping. Due to this, on Friday, Congress leaders have submitted a resolution to the Assembly Secretary, in which they have strongly placed their demand for the removal of Speaker Vipin Singh Parmar. Leader of Opposition Mukesh Agnihotri says that Vipin Singh Parmar is working as a leader of a party despite being Speaker of the Assembly.

According to Mukesh Agnihotri, it has been a tradition of the Vidhan Sabha that every Speaker has always maintained the dignity of the House. However, this is not the case in the case of Vipin Singh Parmar, the current president. He has been continuously violating the democratic system. Sitting on the chair of the presidency, he himself has said this with great pride that he is proud of the ideology he belongs to. Not only he, but the Prime Minister and the President of the country also belong to the same ideology. So this view cannot be wrong.

Opposition protested by wearing black badges
Opposition Congress MLAs boycotted the assembly session even before the question hour began. All the MLAs lodged a protest by wearing black badges. They sat on a dharna after coming out of the gate number 3 of the assembly. After this, 19 MLAs have given a regulation by signing, under which they allege that Speaker Vipin Singh Parmar is conducting the house in a dictatorial manner. They should be removed through Rule 274 under Article 179C of the Indian Constitution.

it’s happened before
Keep in mind that the kind of demand made by the Congress leaders sitting in the Himachal Pradesh Legislative Assembly, the same has been done before. Earlier in 1984, the then Speaker TC Negi was also removed from the post due to the resolution brought to remove the Speaker.