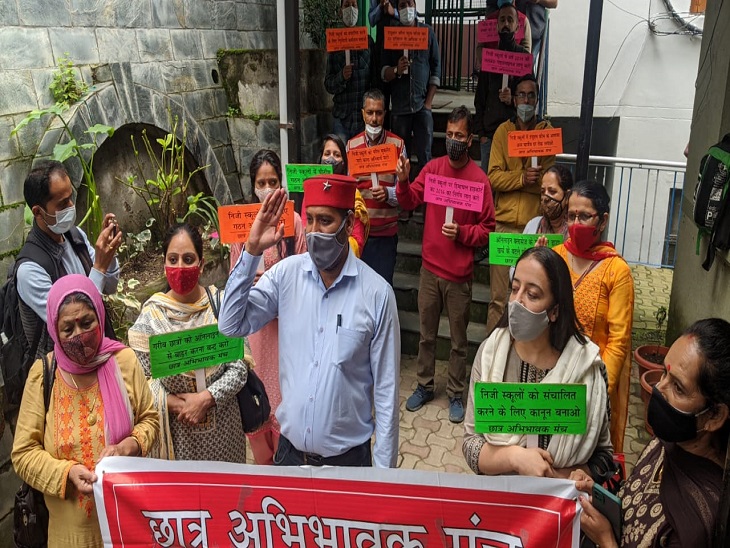 Parents protesting against the arbitrariness of private schools.

The parents of the children demonstrated in the Directorate of Education Shimla in protest against the arbitrariness of private school managers, collection of fees and collection of fees illegally. During this, the parents submitted a memorandum to the Director of Education Amarjeet Singh and demanded a ban on arbitrariness. The Guardian Association warned that if arbitrariness and dictatorship is not stopped, then the movement will become more violent. On which the Education Department assured to issue a notification immediately to stop the loot and arbitrariness of private schools. Vijendra Mehra and Vivek Kashyap, the convenor of the forum, said that it is the failure of the state government that private schools are doing their arbitrariness. Huh. Even during the Corona period, private school managers are charging annual charges, computer fees, smart classroom fees, miscellaneous, sports, maintenance fees, infrastructure funds, building funds, transport and all other types of funds and charges in addition to tuition fees. He says that private schools have cleverly continued the loot by converting more than 80 percent of the total fees into tuition fees in the year 2021. To harass the parents who are not able to pay fees for snatching employment during the Corona period, they are being threatened to charge 100 rupees late fee every day, remove the children from online classes and school.

Parents handing over a memorandum to the Director of Higher Education.

Many types of charges are being charged even if the school is not runningParents say that due to non-functioning of school, the expenses of school administrators for electricity, water, sports, computer, smart classroom, maintenance cleaning etc. have become zero. But in spite of that private schools are increasing the fees by 15 to 50 percent. The government is also completely silent on this hike. By collecting the annual charges, the school management is collecting the admission fees from the back door. Not only this, they are also disobeying the Himachal Pradesh High Court’s 2016 decision, in which the High Court had stayed the recovery of all types of charges. The state government has once again demanded that a law should be made immediately and a regulatory commission should be set up to administer the fee course and admission process in private schools, otherwise the parents will protest.