Fire on a Volvo bus parked on the roadside in Kullu: The car was parked near Vaishno temple for 3 years, due to apprehension-beedi etc.; The careless police are now looking for the owner 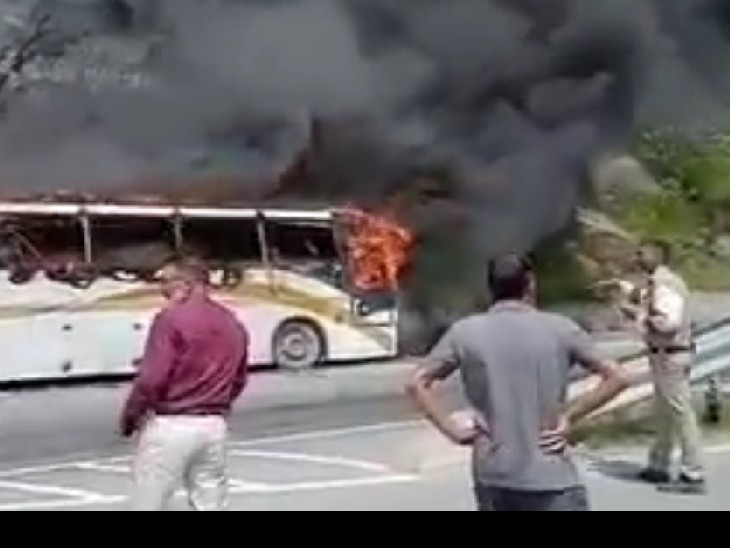 Volvo bus caught fire in Kullu’s Ramshila and people around.

A sudden fire broke out in a Volvo bus parked on the roadside in Himachal Pradesh’s Kullu on Thursday. The fire brigade team reached the spot after getting information and brought the fire under control. However, earlier the flames had also entered the nearby forest. It is said that this bus was standing on the side of the road near the Vaishno temple here for the last three years. It is feared that some passerby threw a burning beedi-cigarette etc. and first the forest caught fire, then the bus caught on. Fortunately, there was no loss of life in this incident, but on the other hand the negligence of the local police administration has definitely come to the fore. At present, the police is looking for its owner.

The incident is of Ramshila located a short distance from Kullu district headquarters. According to the information received, a Volvo bus was standing near the Vaishno temple here for the last 3 years and no one was even taking it from here. On Thursday morning, the flames suddenly started rising in it. When the nearby shopkeepers informed the fire department staff, they reached the spot and doused the fire.

Police Negligence and Argument
On the other hand, when the senior correspondent of Dainik Bhaskar Digital spoke to Kullu police station in-charge Kulwant Singh on this issue, he said that this bus was standing here for the last three years. As per the preliminary investigation, no one has intentionally started the fire. Maybe a passer-by threw a beedi-cigarette, etc. and that caused a fire in the forest. After that the bus also reached. However, apart from the body, the engine was nothing in this bus. When the station in-charge was asked why the police did not try to remove it from here in 3 years, he remained silent. Then on scraping he said that we did not have such a big crane. Yes, its owner is currently being searched.