First picture of Omicron: More mutations in it than in the delta variant, although it does not prove to be dangerous 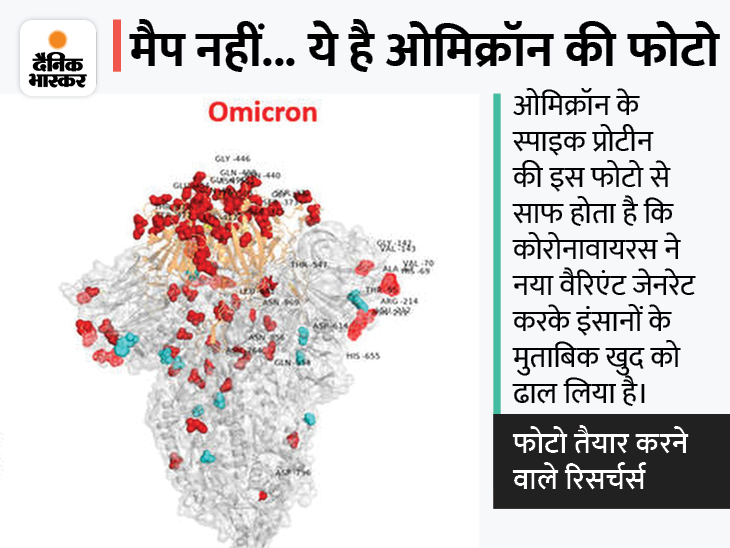 The first picture of the new variant of the coronavirus, Omicron, has been revealed. Researchers from Italy have prepared its photograph. It has been released by the Bambino Gesu Hospital in Rome. Mutations between Delta and Omicron variants are compared in this three-dimensional map-like photo.

According to the Times of Israel, the team of researchers said on Sunday – it can be clearly seen in the photo that the Omicron variant is showing more mutations than the delta. Most of the mutations are located above the region of the spike protein that interacts with the human cell.

What does Omicron’s 3D photograph reveal?
Researchers further say – this does not mean that this Omicron variant or this mutated variant of the corona is more dangerous. It is only clear from the photo that the virus has adapted itself according to humans by generating a new variant. After further research, it will be clear whether this change in the virus is less dangerous, more dangerous or it is not going to make any difference.

Let’s try to understand the picture-

Further study will know its effect on the vaccine
Claudia Alteri, a researcher, said – The research team focused on the 3D structure of their spike protein to compare the mutations of both the variants. This image has been prepared from the study of sequences of the new variant coming from Botswana, South Africa and Hong Kong.

He said that this photo shows the mutations of Omicron, but it is not clear what its role is. Now it will be known through laboratory experiments whether the combination of these mutations will make any difference to the effect of the vaccine.