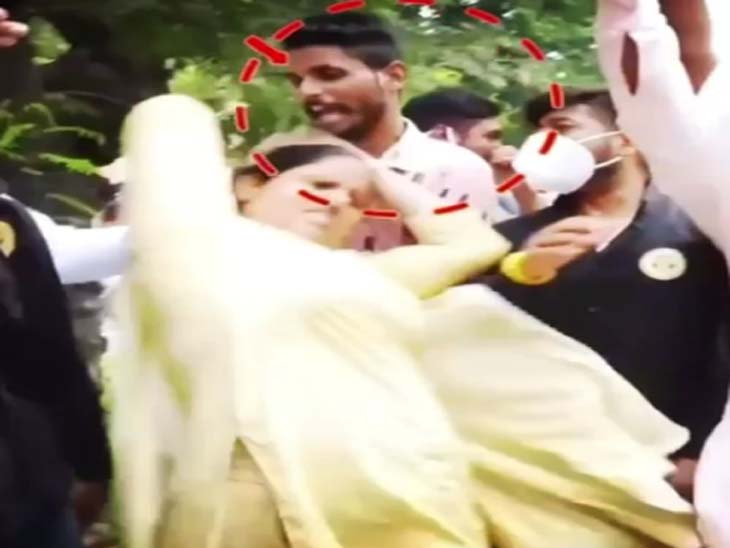 An incident of pulling hair of a girl protesting against the Jan Ashirwad Yatra of Union Minister Anurag Thakur has come to the fore.

An incident of insult to women’s power has come to the fore in a political program in Chandigarh on Thursday. BJP workers of some young women supporting the farmers’ movement, who came here today to protest at the Jan Ashirwad Yatra of Union Minister Anurag Thakur, have been pulled by the hair and there is also an allegation of abusing. The video of this case has become a source of condemnation not only in Chandigarh, but also in the surrounding states. Opposing political parties are taking a jibe at this.

When a farmer-supported girl opposed the BJP, her hair was pulled.

Let us tell you that the Bharatiya Janata Party is being opposed almost everywhere in the country regarding the three new agricultural reform laws. Many violent incidents have also happened in Haryana-Punjab in the past. Due to this, a wrong incident has happened in Chandigarh on Thursday. In fact, Union Minister Anurag Thakur started his Jan Ashirwad Yatra from Himachal Bhawan in the city today. Meanwhile, some women supporting the farmers’ movement reached to oppose this program of BJP. When the yatra left Himachal Bhawan and came near the middle road, many people supporting the farmers raised slogans against the BJP and started showing black flags.

A young man pulling hair came in the video.

When farmers supporters were raising slogans suddenly, BJP leaders also came forward. A BJP leader was seen snatching black clothes from a woman pro-farmer. After that a young man standing behind the girl pulled the girl’s hair. A video of a woman pulling her hair and moaning in pain has also surfaced. It is being said that the BJP workers also abused women.

While raising slogans, the young man pulled his hair.

After this video surfaced, other political parties were seen criticizing this act of BJP supporters. Meanwhile, Aam Aadmi Party leader Pradeep Chhabra said that it is the right of the people to protest peacefully. The way this heinous act has been done by the BJP leaders, it is condemnable.

The BJP leader first had an argument with the girl.