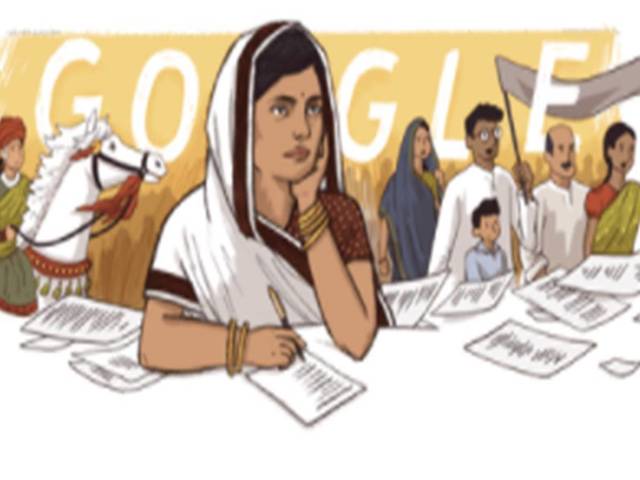 Google on August 16, 2021, paid a tribute to Indian activist, freedom fighter, and poet Subhadra Kumari Chauhan on her 117th birth anniversary with a creative doodle.

The Google doodle was illustrated by a New Zealand-based guest artist Prabha Mallya. The doodle shows Chauhan dressed in a saree sitting holding a pen with several notes. The doodle showcases a Jhansi Ki Rani and freedom fighters.

Google in a statement described Chauhan as a ‘trailblazing writer and freedom fighter’ who earned a national prominence during an era of literature dominated by men.

Who is Subhadra Kumari Chauhan?

•Subhadra Kumari Chauhan was an Indian activist, freedom fighter, and poet whose work gained national recognition during a male-dominated era of literature.

•Chauhan was born in Nihalpur village in Uttar Pradesh on August 16, 1904. Her first poem was published when she was only 9-years-old.

•Chauhan’s poem ‘Jhansi ki Rani’ is one of the most recited poems in Hindi literature. ‘Balika ka Parichay’ and ‘Khilonewala’ are among the list of her remarkable poems.

•Google further said that her poetry and literature work primarily threw light on the hardships of Indian women such as caste and gender discrimination.

•With her steadfast nationalism, Chauhan became a part of the Indian Nationalist Movement in 1921 and used her poetry as a medium to urge people to join the fight for their nation.

•In 1923, Chauhan became the first woman satyagrahi, a member of the Indian collective of non-violent anti-colonialists who was arrested in the Independence struggle.

•Google further in its statement stated that during the 1940s, she published a total of 88 poems and 46 short stories in the fight for India’s independence.