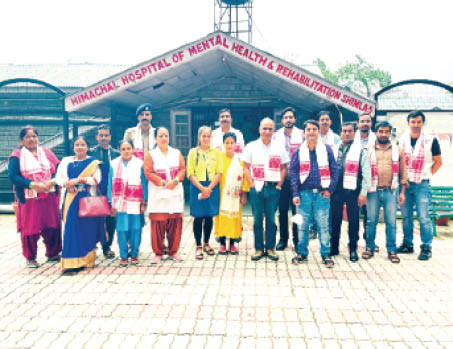 Meeta Das from Assam with her family members.

It was an emotional moment for Mita Das from Assam, when her sister Nomita, daughter Nandita and brother reached Shimla Hospital for mental health and rehabilitation to take her back. Mita Das was sent to the hospital by Judicial Magistrate Paonta Sahib two months ago after she had strayed from her home in Bamugauri village Lanka in Hojai district, 170 km from Guwahati. Mita Das was suffering from mental illness and her condition worsened with the death of her husband in February this year.

She was missing from her house since April and her family had lodged a missing report with the local police station. In a disturbed state of mind, he traveled in trains, buses and landed at Paonta Sahib in Himachal Pradesh and was sent to Shimla Hospital for mental health and rehabilitation by the Judicial Magistrate. Now on Thursday, relatives came to take back the patient.