Dec 4, 2021 Howdangerous is the Omicron variant of Corona, what to do to avoid it 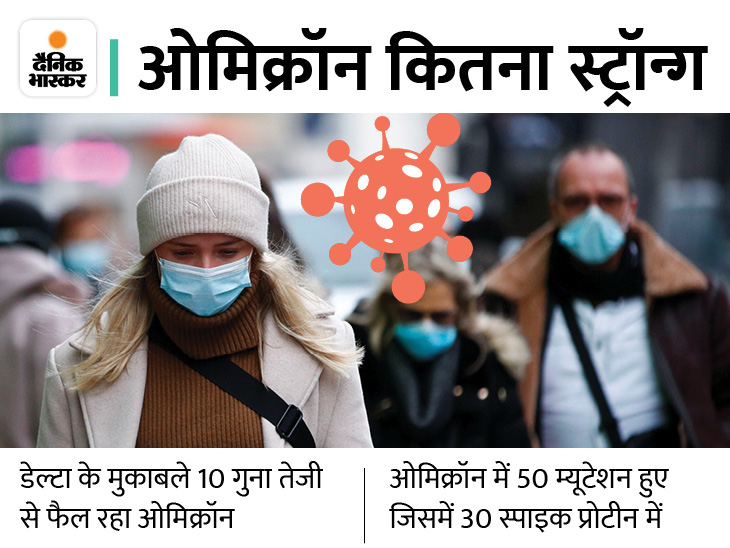 The delta variant of Corona was cited as the reason for the second wave in India. Regarding the speed of the new variant, experts have also warned that Omicron can spread 10 times faster than the delta strain. There is an atmosphere of fear around the world about the new variant and once again the era of restrictions has started.

1. What is Omicron and why is it called a Variant of Concern?
The first case of the new variant Omicron (B.1.1.529) of Corona (SARS-CoV-2) was found in South Africa on 24 November 2021. After its investigation, the World Health Organization (WHO) has placed it in the category of Variant of Concern (VOC). According to initial reports, Omicron is a variant that mutates faster than the delta variant that has wreaked havoc in the world.

2. Is it possible to identify Omicron by the current test method?
The WHO believes that the current test method RT-PCR is correct for the identification of new variants of SARS-CoV2. The RT-PCR method detects specific genes in the virus in the body, such as spike (S), enveloped (E) and nucleocapsid (N). The spike gene is highly mutated in Omicron. Thus, it becomes easy to identify. However, genome sequencing is necessary to fully confirm this.

3. How important is it to be cautious about the new variant?
After all the investigations, WHO has placed Omicron in the Variant of Concern (VOC) category. That is, this variant spreads very fast. It is important to mention that the Omicron variant has been placed in the VOC category due to its mutation, speed of transmission and its ability to affect the immune system.

Vaccine maker Mordana and many experts are also claiming that the current vaccine is not effective on the Omicron variant. There are many claims on this, but under the current system, work is being done to stop it. However, many companies are also working on its booster dose. However, there are still many questions on which research is going on.

4. What precautions should we take?
As we have already mentioned, efforts are on to stop this variant under the current system itself. This variant can be prevented from growing by both rapidly increasing the vaccine and further speeding up the testing process. Social distancing with proper wearing of masks, staying away from crowded places and maintaining good ventilation in the home-office is the best way to avoid this. It is necessary to follow the Kovid Appropriate Behavior.

5. Will there be a third wave of corona?
After South Africa, the new variant has reached 34 countries. The severity of its disease is also not clear yet. So it is too early to say how dangerous it can be. In India too, two cases of this have been found in Karnataka.

Nothing is clear about the behavior of this variant due to the delta variant and the fast pace of vaccination in the country. High seropositivity ie antibodies in people also weakens its risk. However, work is going on for its scientific proof. Only then will the correct information come out.

However, experts say that where there is nothing, at least the vaccine is capable of preventing people from going into a bad situation. That is, after vaccination, the risk of death is averted. That’s why everyone should get the vaccine.

7. What is the preparedness in India to deal with it?
The central government is closely monitoring it to deal with the new variant. Some restrictions have been imposed on at-risk countries. The government has also issued a new guideline for this from December 1. In which testing and isolation has been made necessary for people coming from at risk countries.

Along with this, their contact tracing is also being done by various state governments at their level. Various health bodies of the central government are also monitoring at their own level. Scientists and medical experts are also gathering information about the new variant.

Major accident in Mumbai: A massive fire broke out in a 20-storey building in Taddev area, 7 killed; 6 out of 19 injured