Incident: Accident during repair of 45 feet high chimney in a cement factory in Porbandar, 6 workers buried under the debris; three were fired 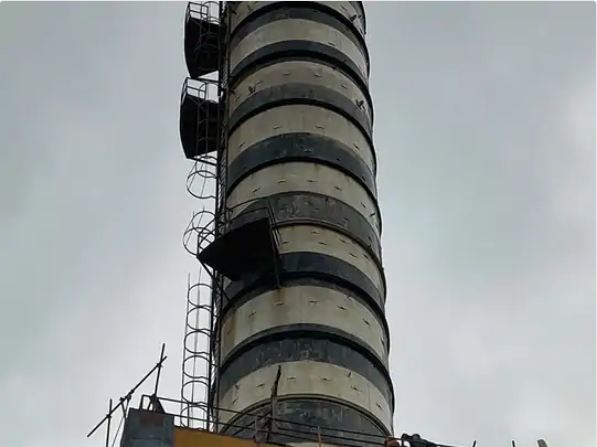 Repair work was going on in about 45 feet high chimney at the Elephant Cement Factory of Saurashtra Cement Limited.

Five to six workers are feared to be crushed in a major accident on Thursday evening at Saurashtra Cement Limited located at Ranavav-Adityana near Porbandar and rescue operation is being carried out by machinery to rescue the crushed workers. According to the information of the incident, repair work was going on in about 45 feet high chimney in the elephant cement factory of Saurashtra Cement Limited located on Barda Dungar Road in Ranavav-Adityana. A matcha was made for a support inside the chimney for repair work.

Five to six laborers died after the match suddenly collapsed during repairs.

It is feared that five to six laborers were buried after the match suddenly collapsed during the repair. The incident was reported two hours later in the evening. Till then the factory managers and officials had done the rescue in their own way, but due to no way out, they had to take recourse from the administration. The matcha was made for painting and repair work from inside the chimney, about 45 feet high. The stepfolding at the top of the mache suddenly broke, causing the mache to fall immediately.

On the orders of the Chief Minister, 2 teams of NDRF have been sent to help in this operation.

It has been learned that the crane was brought from outside as there was no big crane to lift the machine lying inside near the factory or in Ranavav. On getting information about the accident, journalists reached the spot. But the factory gates were closed. No journalist was allowed inside. On getting information about this accident, the team of Police DYSP, Mamlatdar, Fire Brigade has reached the spot. Till late night, Porbandar Collector Ashok Sharma and SP Dr Riv Mohan Saini also reached the spot and inspected. Police has started further investigation.