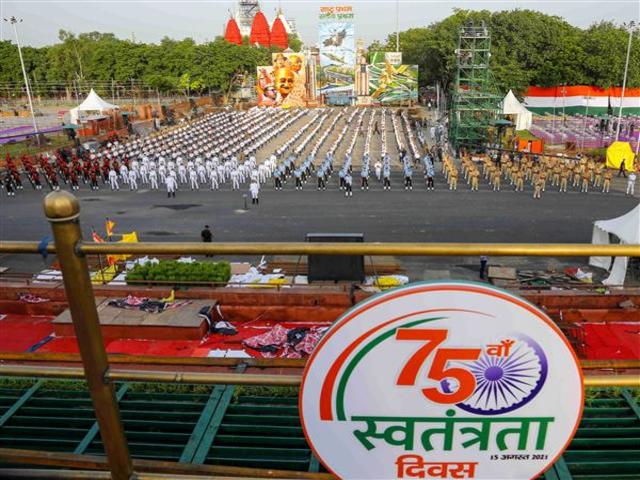 Prime Minister Narendra Modi will kick off grand celebrations on August 15, 2021, from Red Fort. All central ministries and concerned departments will present projects and programmes to showcase India’s development, governance, progress and policy, and technological reforms.

This year’s celebration of 75 years of independence, India will launch year-long celebrations of independence starting from August 2021, including from the launch of a website with a Virtual Reality (VR) feature for the first time to the Indian Army hoisting the tallest National Flag in J&K.

•Azadi ka Amrit Mahotsav is an intensive, countrywide initiative of the Government of India to celebrate 75 years of Independence of India from 200-years of British Rule. The Mahotsav is an embodiment of India’s development, governance, progress and policy, technological reforms, and economic identity.

•PM Narendra Modi flagged off the Padyatra (Freedom March) from Sabarmati Ashram, Ahmedabad while inaugurating the Azadi ka Amrit Mahotsav on March 12, 2021, which is 75 weeks prior to 75th Independence Day. The Mahotsav will run throughout 2022 and end on August 15, 2023.

2. In a first, Indian govt unveils a website with VR feature for 75th Independence Day

•Defence Secretary Dr Ajay Kumar on August 3, 2021, unveiled a website to mark the 75th Independence Day celebrations across the country.

•The website (https://indianidc2021.mod.gov.in/) aims to connect Indians from across the world to participate in the celebrations of India’s Independence Day.

•The website is installed with a Virtual Reality (VR) feature for the first time that will showcase the real-time celebrations from the Red Fort in New Delhi in a 360-degrees format. People can access the show with or without a VR gadget.

•The Indian Army on August 10, 2021, installed a 100-ft tall Indian National Flag in Gulmarg, Jammu & Kashmir. The Armed Forces hoisted the flag on August 15, 2021, to mark the 75th Independence Day in the country.

•Federation of Indian Associations – New York, New Jersey, and Connecticut in the US will hoist the biggest Indian National Flag at Times Square in New York on August 15, 2021.

•The Indian National Flag will measure 6 feet by 10 feet and 25 feet tall. The Indian Association had the first time unfurled the Indian tricolor at Times Square in New York on August 15, 2021.

5. India shares its Independence Day with other countries that got independent on August 15

•Liechtenstein, the smallest nation in the world celebrates its Independence Day on August 15 to commemorate its freedom from German rule in 1866.

•South Korea and North Korea celebrates National Liberation Day of Korea to commemorate their independence of the Korean Peninsula from the Japanese occupation by the US and Soviet Forces till 1945.

•The Democratic Republic of the Congo celebrates the Congolese National Day to mark its independence from France after 80 years of subjugation in 1960.

•Bahrain declared freedom from British rule in 1971 after a UN survey of the Bahraini population.

New guidelines on the treatment of corona: Doctors should avoid giving steroids to the patient, due to this there is a risk of black fungus; Get tested for TB in case of excessive cough

Maharashtra Congress leader’s letter to Sonia Gandhi: Shiv Sena and NCP together are weakening the Congress, 12 Congress ministers are not working on the party’s agenda