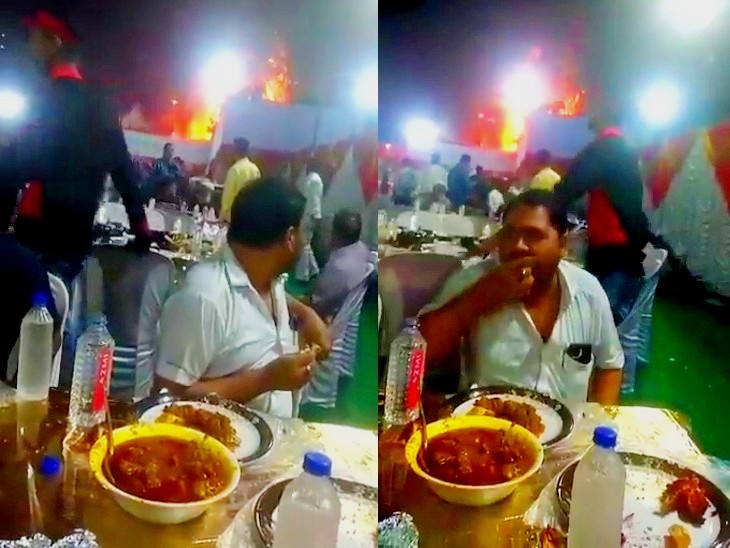 In the video that has surfaced, the person sitting at the dinner table looks at the fire and starts eating again.

A massive fire broke out at Ansari Marriage Hall in Bhiwandi in Maharashtra’s Thane district late on Sunday night. The fire was so fierce that in no time the entire marriage hall was burnt down. The bride and groom were rescued with great difficulty. Meanwhile, a very insensitive picture of this fire has come to the fore. During which there was a fire in the marriage hall, some people were feasting. They kept on eating and smiling, despite knowing that the fire was growing.

In the video that has surfaced, some people are sitting on a table. Food is kept in front of them and there is a huge fire behind them. The waves of fire are blazing and the people sitting at the tables are having fun. Some people are also seen running in the video. Now after the video of the incident surfaced, social media is now criticizing the people who are feasting on the wedding.

The fire was so fierce that in no time the entire marriage hall was burnt down.

5 bikes and 1 car also burnt
Thane Municipal Corporation said that it took about 3 hours for half a dozen fire brigade vehicles to control the entire fire. There is no report of any injury in the accident. Due to the fire, some nearby vehicles also caught fire. It is believed that due to the food being prepared in the marriage hall, the fire started and reached the parking lot while growing up. 5 bikes and 1 car have been gutted in this fire.

In this fire, 5 bikes were burnt to ashes.

There was also a fierce fire in Meerut
On Sunday, a house in Khandak area caught fire due to leakage in LPG gas in Meerut, UP. Two girls died in this incident. The fire incident has now been brought under control. The fire department was immediately informed about the fire. Along with this, the police was also informed about the incident, after which the fire brigade immediately reached the spot. The fire was brought under control after much effort. Meerut Municipal Magistrate Amit Bhatt said that the house caught fire due to a gas leak.