Jan Ashirwad Yatra: Darshana came to Surat for the first time after becoming a Union Minister, welcomed at 13 places, Patil was not seen 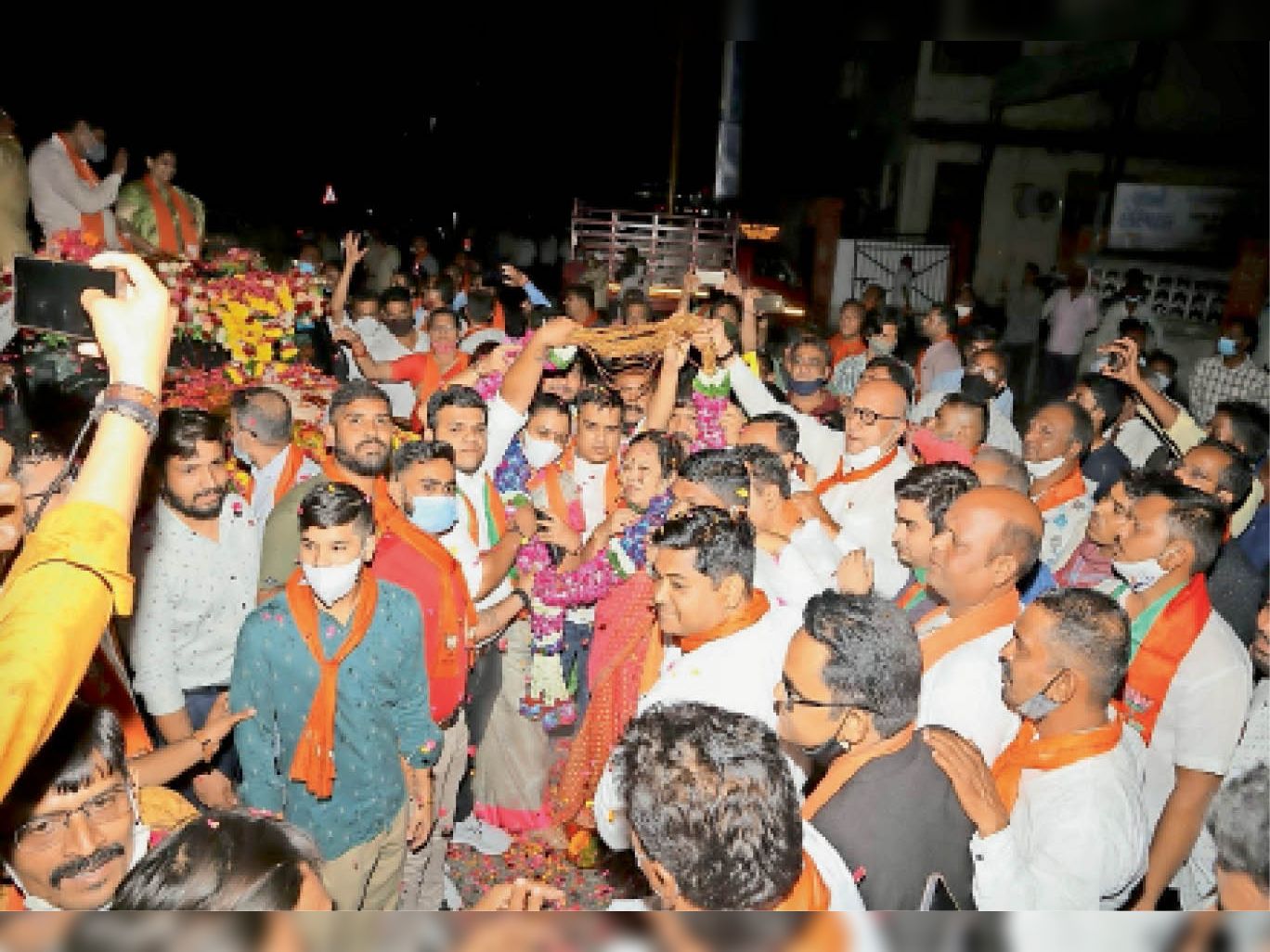 Darshana said: I got the blessings of all sections including OBC, SC-ST, minority society.

Surat MP Darshana Jardosh came to the city on Tuesday, 42 days after becoming the Minister of State for Textiles and Railways in the Central Government. She reached Surat under Jan Ashirwad Yatra. During this, he was given a grand welcome at 13 places during the journey of about 24 km in Surat. After becoming a minister from MP, he also demonstrated power in the form of Jan Ashirwad Yatra. BJP state president CR Patil was not seen during the entire journey.

Darshana Jardosh said that whether it is OBC society, SC-ST society or minority society, I have got the blessings of all. Darshana Jardosh, who became the MP of Surat for three consecutive times, started the road show in the state as a Jan Ashirwad Yatra from Anand from August 15. Darshana had entered the city from Kamarej at 5 pm on Tuesday by taking Jan Ashirwad Yatra.

Traffic jam due to heavy rush during the journey, people got upset
Due to Jan Ashirwad Yatra, people got the most trouble in Chowk Bazar. Half an hour before Darshana Jardosh’s arrival, at around 8:10 pm, the road from Makkai bridge to Gandhi Bagh was closed by the police for movement. Due to this, the city buses going to the depot of Gandhibagh were also stopped at the same time. People going towards Gandhibagh had to face trouble for about an hour.
The minority community welcomed Darshana Jardosh near Chowk Bazar Fort. Barricades were erected at Chowk Bazar intersection to go to SMC or Bhagatlawo via State Bank. In such a situation, before the arrival of Darshana and even after going towards Katargam, there was a jam of vehicles. The journey was also stuck in a jam. In the end, the barricades were removed after talking to the traffic police.

Union minister also went to Patidar areas
The responsibility of strengthening the organization by doing public relations has been entrusted to Darshana Jardosh. The yatra also reached those Patidar areas where the BJP has been finding it difficult to mobilize crowds for the past several years. During the visit, the leaders flouted the guidelines of Kovid. Several leaders including local MLA and Minister of State Kumar Kanani attended. Many leaders were seen without masks along with Mayor Hemali.

Meeting with BJP leaders today: On Wednesday, Jan Ashirwad Yatra will reach the Pradhan Mantri Garib Kalyan Anna Yojana Center in Vesu at 11:10 am. At 11:30, Darshana will hold a meeting with the leaders in the BJP office. There will be a meeting on Women Empowerment at 2:30 pm. There will be a press conference at 4 pm. Then the Traders Association will welcome them. After that the journey will be over.

Minority society also gave a grand welcome to Minister Darshana in Chowk Bazar
People of minority community had organized a welcome program at Chowk Bazar at 6:50 pm, but Darshana reached two hours late. People had to wait for 2-2 hours in all the programmes. Darshana asked to welcome him in his open jeep. However, on the request of the Minority Front, Darshana got down from the open jeep and gave 2 minutes to welcome. On this occasion, Darshana said that all religions are promoting equanimity. Be it OBC, SC-ST society or minority society, I have got the blessings of Narendra Modi through the blessings of all of you.

Police clash with leaders-workers standing to welcome near old civil hospital
BJP MLAs, corporators, workers were standing near the old civil hospital in Chowk Bazar to welcome the Jan Ashirwad Yatra of Darshanaben Jardos. There was a traffic jam due to heavy rush. To clear the traffic, the police asked the MLA, municipal servants and workers to move off the road. The workers clashed with the policemen for not moving off the road. After this incident, the police personnel engaged in the settlement called a sub-inspector. After a clash between BJP workers and police, MLA Harsh Sanghvi complained to the police commissioner and leaders in Gandhinagar. After this the eighth police reached the spot.

Nothing like clashes with workers has come to my notice during the Yatra. PSI and D-staff were posted near the old civil.
-DS Korat, Inspector, Athwalines, Police Station

Clashes broke out with police workers. I have complained about this to the police commissioner. If they had explained to the workers calmly, they would have gone off the road. The language style of the police was not proper. Harsh Sanghvi, MLA, Majura