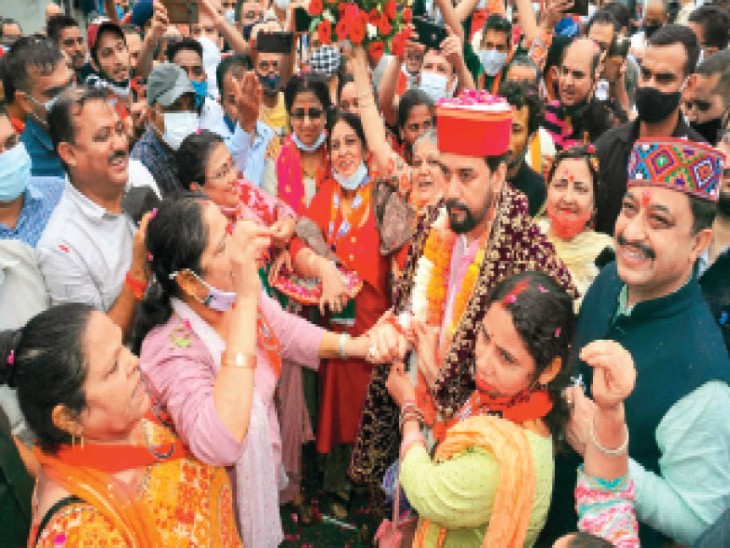 Anurag Thakur was given a warm welcome on his arrival in Dharamsala.

Kangra, Union Information and Broadcasting Minister Anurag Thakur while addressing the press conference in Dharamsala said that Dharamshala is my second home, when I was not in politics, I used to come here more. He said that district Kangra and Dharamsala have a big contribution in my political journey, I have a very deep connection with sports. He said that the new cabinet was expanded by Prime Minister Narendra Modi, whose introduction was not allowed by the opposition party and Congress in Parliament. He said that the opposition parties did not want any discussion in Parliament, they wanted the session to be washout.

He said that every Prime Minister has introduced his cabinet, Congress has not allowed this to happen. This is because today Modi’s cabinet is the youngest cabinet till date. Every category has been given place in this cabinet and the central government has given place to 11 women in the cabinet. He said that Jan Ashirwad Yatra is going on all over the country, I came to Himachal after the formation of Parliament, so we started this journey from Shimla, we have got blessings for thousands of people in the Yatra. He said that every day the enthusiasm and support for the Yatra is increasing among the public as a blessing.

Thousands of people welcomed the yatra in Mandi even at 12 o’clock in the night. Our 31 programs on 20th August and 35 programs on 21st August were held under Jan Ashirwad Yatra, we are meeting 30 to 35 thousand people every day. He said that everyone is benefiting from the public welfare policies of the Modi government. When I go back, I will tell Modi ji how much the people of Himachal love him. He said that Dharamshala is a land of Veer as well as a land of sports. We will try to expand the facilities of sports here. He said that along with sports, our priority should be to give local to global recognition to the art and culture of Himachal. Anurag Thakur was addressing the journalists at Paridhi Griha Dharamshala. Himachal will be made a sports hub. There will be more events here, the Center will work on it. Art Culture Kangra Painting, Chamba Rumal, Thal, Sobha Singh Art Gallery need to be promoted.

Expansion of Kangra Airport is the need of the hour
Union Minister Anurag Thakur said that Kangra airport will be expanded. Airport expansion is the need of the hour. The central government is serious about the expansion of the airport. With the expansion, where local traders will benefit, tourism will also increase. Anurag, who reached Kangra under Jan Ashirwad Yatra, told this to the journalists. He said that people will also get employment opportunities here.

I have brought a gift for Dehra, CU construction will start soon
I have brought the gift of Central University to Dehra. VC has been appointed, now construction work will also start soon, for which ₹ 500 crore has also been released. This was stated by the Union Minister Anurag Thakur with the journalists at the Nature Park located in Sadwan of Jaswan Paragpur Assembly Constituency. Earlier, Industries Minister Bikram Thakur welcomed Anurag Thakur from place to place. Talking to the media, Union Minister Anurag Thakur said that Jaswan Paragpur had blessed with an open mind by giving maximum votes in the Lok Sabha elections and is getting huge blessings even today.

A warm welcome was accorded to Anurag Thakur on his arrival at Nadaun.
Anurag Thakur’s Jan Ashirwad Yatra reached Nadaun border late in the evening, about which people got a lot of enthusiasm. BJP workers had made welcome gates from place to place, where Anurag Thakur was welcomed with great warmth and drums by the BJP workers. Along with him, senior BJP leaders and chairman and vice chairman were also involved in this visit. On the border of Nadaun assembly constituency, Anurag was warmly welcomed with drums by BJP workers, officials and social organizations under the leadership of former MLA and BJP District President Baldev Sharma and HRTC Vice President Vijay Agnihotri.