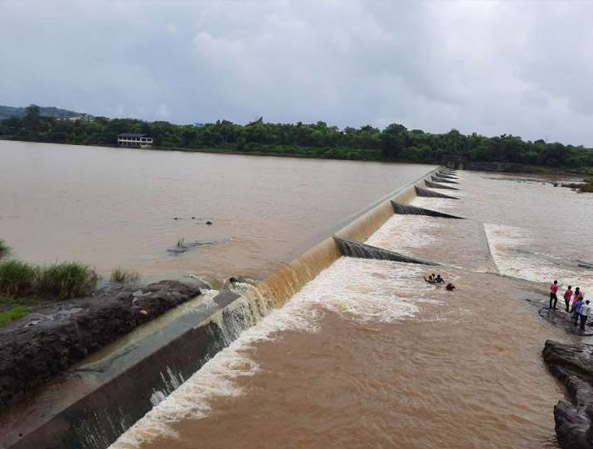 Slow-down rains for the last 3-4 days have fulfilled the intention of the farmers of the district.

In the Union Territory of Daman Diu, it is raining happiness in Sawan. The water level of Shelty, Rudana, Talawali, Umvarani, Bedpa, Bescha, Chisda, Khedpa, Sindoni, Vansda, Karchaund, Medha, Waghchauda, ​​Ambabari, Kherdi ponds, check dams and wells have increased due to slow rain. The water level in the Dudhni reservoir has reached a height of 30 meters. Due to this the shortage of drinking water and irrigation seems to be overcome.

Due to weak monsoon this year, the water level of rivers and streams is running normal.

Slow-down rains for the last 3-4 days have fulfilled the intention of the farmers. The clouds continued to rain at a slow pace from early morning till late afternoon on Tuesday. The rain has brought down the temperature significantly. Savji Garel, the former Deputy Sarpanch of Mandoni, said that this year the rains are less than last year, but the thirst of Kharif crops has been quenched by the daily rains.

People in villages have understood the importance of Jal Shakti Abhiyan. The farmers had cleaned the surrounding ponds and reservoirs and repaired the broken walls before the rain. There are more than 120 ponds in Kilvani Randha, Morkhal, Galaunda, Kherdi, Khanvel, Khutli, Mandoni, Sindoni, Dudhni, Kauncha in Gaucharan and government land, which are half filled with water. Due to the rains of Sawan, there has been a huge increase in the water reserves in the wells. Due to which the degradation of ground water will be stopped.

Due to weak monsoon this year, the water level of rivers and streams is running normal. There has been a decline in the flow of Damanganga. The water level of the river has fallen to 27 meters on the Athal bridge. According to the flood control center, the water level of Madhuban Dam has started touching the height of 75 meters. Till now the city has received 1150 mm and Khanvel 1525 mm, which is far behind other years.