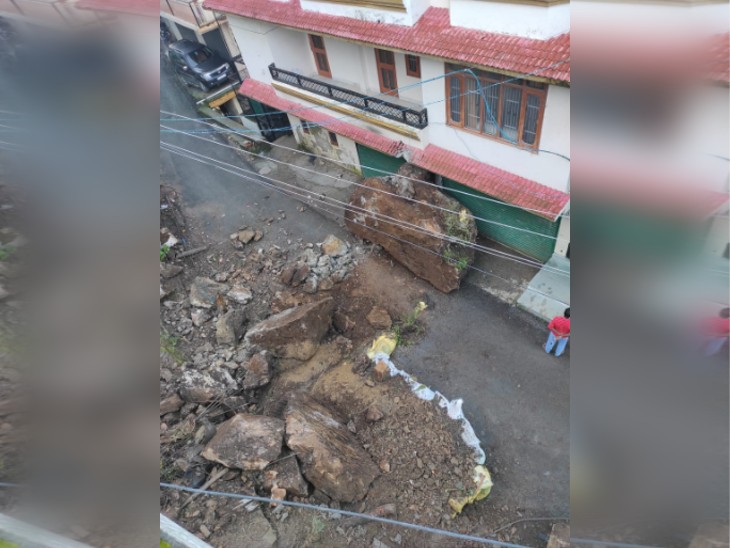 Large rock in the debris of a landslide in Shimla, which shook the foundation of the former MLA’s house.

Homes are at risk. The accident took place in Hathini Dhar area of ​​Hira Nagar, 10 km from Shimla. In this, the residence of former MLA Baldev Sharma has also been damaged. IPH’s storage tank electrical poles have been threatened by falling rocks. A big rock has fallen in front of the former MLA’s house. Local people allege that they are digging in the mountain. This accident has happened due to the negligence of the building owners. In this regard earlier also people were told that instead of raining, work should be done back and forth. But he did not agree and this accident happened, although there was no loss of life or property due to the falling of the rocks. But the houses on which the mats have fallen have been damaged.

The road was jammed after crossing the hill near Jhirdu turn on Khadara Mukh Holi road.

The hill cracked on the Khadda Mukha Holi road of Chamba, jammed
The same weather has hit Chamba district as well. The movement of vehicles is stopped due to the hill crossing near Jhirdu Mor on Khad Mukha Holi road here. Due to this, passengers leaving for Chamba and Bharmour in Kangra district in Holi valley are also stuck. It is being told that due to rain for two days, the mountains have started cracking on Khadara Mukha Holi Marg. On Sunday late night, the hill cracked and rock and debris came on the road. Traffic was yet to be restored till the last information was received.

Landslide 2 vehicles damaged near Dharampur on Shimla Chandigarh Highway
On the same Chandigarh Shimla National Highway, stones have fallen from the mountains near Dharampur. Two vehicles have been hit by it. 6 people in the vehicles have narrowly survived. It is being told that as soon as the stones fell from the mountains, they collided with the car and stopped there. In such a situation, vehicles were coming towards Shimla due to a major accident, only vehicles were damaged in the accident.