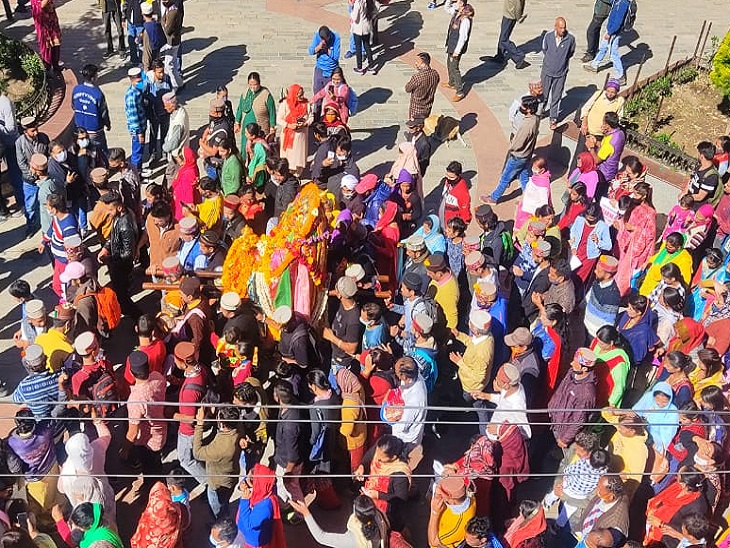 To enhance the glory of International Dussehra, the grandmother of Kullu dynasty and the beloved goddess of the valley, Mother Hadimba, along with her hundreds of Karkoons and Devluys, left for Kullu with divine powers. Thousands of devotees from Mata Hadimba Complex to PWD Campus took blessings of happiness and prosperity from Mata Hadimba. Devotees welcomed the mother from place to place and distributed prasad to the gods and goddesses.

On Thursday morning itself, the Dhungri courtyard of Mata Hadimba resonated with the melody of Dev musical instruments. Aaradhya Devi was duly worshiped by the devotees and karkoons. Mother told that everything should be fine in Dussehra through gurus in Dhungri and Durga Mandir premises of Manali market. Mata Hadimba’s convoy left Dhungri at 7.30 in the morning. The mother was given a grand welcome by the devotees and devotees from place to place. It took Mata more than one and a half hours to cover a distance of one kilometer. Meanwhile, Mother blessed thousands of devotees with happiness and prosperity. Mata’s convoy stayed for half an hour at Durga Mandir located in Mall Road Manali. As soon as Mata Hadimba reached Manali Mall Road, Mall Road reverberated with the melody of Dev musical instruments. Hundreds of tourists also captured these moments on camera.

It took one and a half hours to cover the distance of one kilometer.

everything will be fine in dussehra

Mata Hadimba was given a rousing welcome by PWD Department Manali on her arrival in the courtyard. Along with welcoming the mother, the department also arranged prasad for the devotees and karkoons. The PWD department has been providing prasad and refreshments to the devotees during the visit of Mata to Dussehra since 1976. SDO Rana of PWD Department Manali welcomed Mata Hadimba and took blessings of happiness and prosperity. Mata’s priest Rohit Ram Sharma and Kardar Negi told that the mother herself has told to fix everything in Dussehra. He said that Mother left for Kullu for Dussehra with hundreds of devotees.