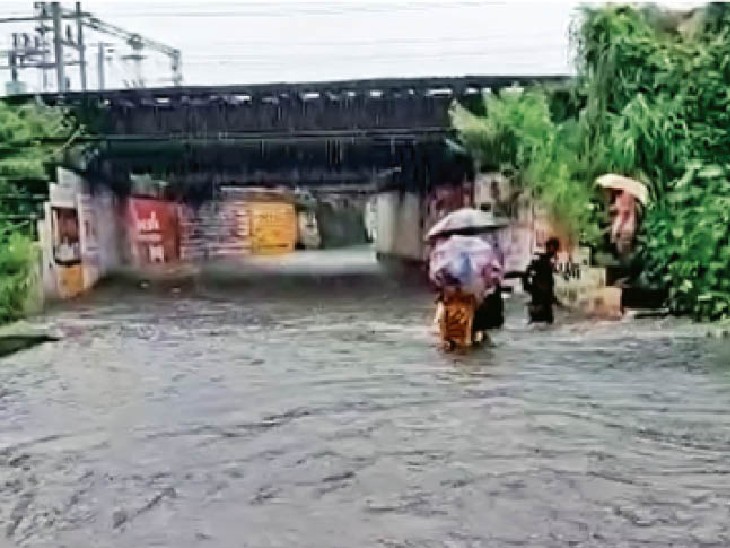 Due to the rain, the place filled with water.

Amidst the possibilities of heavy rains in South Gujarat, there was a banging entry of monsoon in Valsad district on Thursday. The rains continued throughout the day, due to which not only the normal life has been affected, but due to this rain, the farmers have also got relief. The rainy season had started in the district from Wednesday night itself, which remained the same till late Thursday night.

According to the information, the maximum rainfall in the district from 6 am to 6 pm has been recorded in Valsad and Pardi taluka of 5-5 inches. On the other hand, Dharampur and Vapi talukas received 4-4 inches of rain. While Umargaon and Kaprada talukas have recorded two and a half inches of rain. After the rain after a long break, now the worry of water seems to be ending among the farmers.

According to the rainfall data in Valsad district from 6 am to 6 pm, Pardi recorded 125 mm, Valsad 124 mm, Dharampur 97 mm, Vapi 97 mm, Umargaon 60 mm and Kaprada 58 mm. Has been. Due to the continuous rains in the district, there is a wave of happiness among the farmers.

Chhipwara’s gutter submerged, traffic disrupted
Due to continuous rain in Valsad city from Wednesday night till late Thursday evening, water logging situation has arisen at many places in the low lying areas. The Chhipwad railway gurnala connecting Valsad city and Khergam was submerged due to this rain, disrupting traffic. Due to which questions have arisen regarding the pre-monsoon works of Valsad municipality. Questions are being raised among the people about the works of the municipality after rain water as well as sewerage water has been collected in the Chhipwad railway garnale located on Khergam road.

Rain in Navsari too, water inflow increased in Juz Dam
The Meteorological Department had warned of heavy rains in South Gujarat, due to which the arrival of the weather also started on time and there was a rainy atmosphere in Dang including Navsari district on Thursday. Due to incessant rains in Navsari district for the last two days, Chikhali taluka has recorded 1 inch of rain. Along with this, 5 mm of rain has been recorded in Navsari, 5 in Jalalpore, 10 in Gandevi, 29 in Chikhali, 37 in Khergam, 4 mm in Vansda. Rivers have also started appearing in spate in Navsari district. While the water level of Juz Dam has been 162, Kelia 109.20 due to continuous rain.