Monsoon again kind on Haryana, Himachal and Chandigarh: It rained in the early morning in all the three states; Dense dark clouds covered Punjab, people enjoyed the pleasant weather 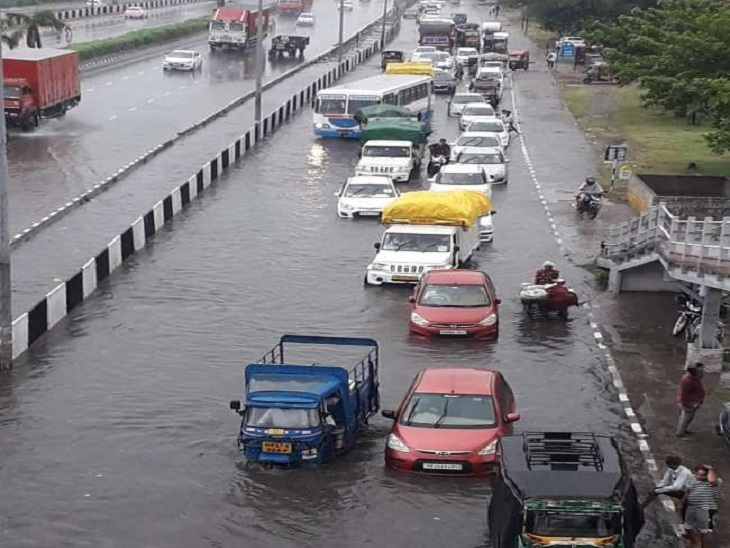 Water standing on the roads and vehicles passing through it after the rain in Panipat.

Saturday started with rain in Haryana, Himachal Pradesh and Chandigarh. It had been a thick cloud cover since Friday evening and the weather remained cool throughout the night. But it rained early Saturday, which continued for several hours. It is still raining in many cities. But people got relief from the heat and humidity due to this rain. Farmers have also got relief.

Light rain fell in Chandigarh, but the weather is pleasant
For the last several days, there was an atmosphere of heat and humidity in Chandigarh. But on Saturday morning, it rained a little, but the townspeople got some relief. It has rained for the third time in the last one week. According to the Chandigarh Meteorological Department, westerly winds are moving towards this region, due to which the weather is likely to change. For the next 2 to 3 days, there is a possibility of good rain in the city. The city recorded a maximum temperature of 30.6 degrees Celsius on Friday, the lowest recorded in the last 10 years. In the coming days also due to rain, a drop in temperature can be recorded. Talking about this monsoon season, Chandigarh has received a total of 325.6 mm of rain so far, whereas it should have been 487.2 mm i.e. this season Chandigarh has received 33% less rain than normal.

A view of the weather of Chandigarh after the rain.

Snowfall occurred on the mountains along with rain in Himachal
Himachal Pradesh also received rain on Saturday morning. The weather was pleasant, but the water level of rivers and streams has increased. It is raining in most parts of the state right now. Till 10:00 am, 11 mm in Shimla, 10 in Sundernagar, 8 in Kalpa, 7 in Dharamsala, 12.7 in Nahan, 13.9 in Palampur, 19.4 in Kangra, 10.5 in Mandi, 12 in Jubbarhatti, 11.7 in Solan, 10.8 in Mandi mm of rain has been recorded. According to the Meteorological Department, due to the active western disturbance, there is a possibility of rain till August 25. This can further increase the water level of rivers and streams. Apart from this, there has been light snowfall on other high peaks including Baralacha, Shinkula.

A view of pleasant weather after rain in Himachal Pradesh.

Rain in Rewari, cloud cover in Narnaul and Jhajjar
After the entire month of Sawan turned dry, southern Haryana received relief rains on Saturday morning. It has been raining in Rewari since morning, while Narnaul and Jhajjar are cloudy. At the same time, this rain is also very beneficial for the farmers. In this season bajra, cotton and moong are grown in southern Haryana. If there is good rain, then farmers will not need much irrigation in the fields. Rewari also received light rain on Friday. But due to lack of good rain, the temperature had reached 38 degrees. After changing the weather, the temperature has dropped by 5 degrees. Rewari had received good rains in the month of July, but in the first three days of August there was light drizzle. Later, with the rise in temperature, the sultry heat had made people sweat. After the change in the weather on Friday evening, people got some relief.

People walking towards their destination during the rain in Rewari on Saturday morning.