Monsoon sluggish, Bhakra-Pong water level lowest in 5 years: Haryana-Punjab has been dry for half the Sawan, crops on the verge of drying up due to lack of rain after August 3; Lack of water in canals due to dam emptying, signs of relief in a week 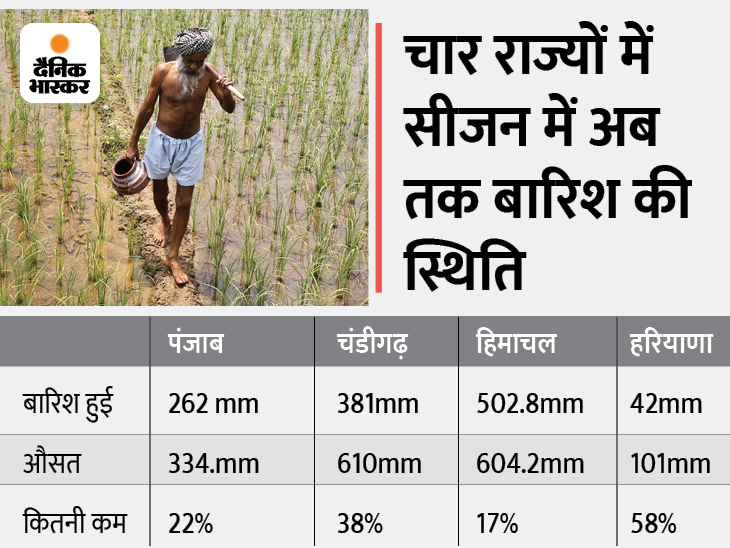 Haryana, Punjab, Chandigarh and Himachal Pradesh are not receiving rain this time despite Monsoon. More than 95% areas of Haryana and Punjab did not receive a drop of water after August 3. Here only half the season has gone dry. In fact, the condition of Monsoon break has become in Haryana due to weakening of Monsoon winds due to the western end of the Monsoon turf line moving towards the foothills of Himalayas after August 10. This time Punjab has received 22% less rain than the average, Chandigarh 38% and Himachal Pradesh 17% less than the average. The Bhakra and Pong Dams, which are the biggest sources of water supply in these four states of North India, are lying vacant due to lack of rain even in the upper areas of Himachal.

Lowest water in 5 years in Bhakra and Pong Dam
This is the first time in the last 5 years that despite the monsoon, both the dams are so empty. Due to the low water level of Bhakra and Pong dams, full water is not being released in the canals. Due to this, there is a danger of drying up of crops in the canal water-dependent areas of Rajasthan, besides Haryana and Punjab. The worst situation is in southern Haryana. If there is no good rain in the upper areas of Himachal Pradesh even in the next 15-20 days, then there may be water shortage in large parts of these three states.

Water inflow less, outflow more in Bhakra-Pong Dam
The inflow of water in Bhakra and Pong dams has reduced for the last five days. The biggest reason for this is the lack of rain in Himachal Pradesh. In upper Himachal especially Kinnaur and Shimla district, only when it rains, the water there comes into the reservoir Govindsagar lake of Bhakra Dam through the Sutlej river. Similarly, rain water falling in Kullu, Chamba and Mandi districts comes to Pong Dam through Beas river. On the other hand, there has been an increase in the outflow of water from both the dams as there has been an increase in the demand for canal water to save crops due to lack of rain in Haryana, Punjab and Rajasthan’s Sri Ganganagar-Hanumangarh districts.

Fazilka in Punjab receives the least rain
In Punjab from June 1 to August 18, the highest rainfall occurred in Pathankot district and the least in Fazilka. Pathankot received 773.3 mm of rain during this period, which is 7% more than normal (724.5 mm). On the other hand, Fazilka has received only 50.7 mm of rain so far, which is 75% less than normal (199.8 mm). Talking about Chandigarh, against the normal 610.6mm of rain, only 381.4mm of rain has fallen so far.

Problems in many districts including Mahendragarh-Rewari dependent on canals
Many districts including Mahendragarh and Rewari of Haryana are completely dependent on canal water. In the month of August, so far Mahendragarh district has received rain for only five days. This year, the problem has arisen due to the delay in the first monsoon and after that the cut in canal water is more than in previous years. According to the officials of the canal department, the situation is looking fine at present, but if there is no rain in the upper areas of Himachal Pradesh, then it will have a direct impact on these districts.

It may rain in the next week
The Meteorological Department has forecast rain in Punjab, Chandigarh and Himachal during the next one week. According to the Agricultural Meteorological Department of Haryana Agricultural University, Hisar, due to the formation of a low pressure area in the Bay of Bengal and cyclonic circulation, the weather will change in Haryana from late night on August 19. During this, apart from strong wind, there may be rain and thunder, which will bring down the day temperature. Heavy rain may also occur at one or two places in North and South-East Haryana. The Meteorological Department has forecast bad weather in Himachal till August 23. Here on August 20 and 21, a yellow alert has been issued for Una, Bilaspur, Hamirpur, Chamba, Kangra, Kullu, Mandi, Shimla, Solan and Sirmaur districts.

If it rains till September 15, the dam will be filled
Himachal Pradesh Fisheries Department says that Bhakra-Beas Management Board (BBMB), which manages Bhakra and Pong dams, is releasing more water for Punjab, Haryana and Rajasthan these days than in previous years due to less rainfall. This is also one of the reasons for the low water level. Of course, at present the inflow of water in Sutlej, Beas and Ravi rivers is less but there is still some time for monsoon. If the rains continue till September 15, it is expected that the water level of Bhakra and Pong Dam will reach near normal level.

Impact on farming in plains, gardeners benefit in mountains
According to Dr. Balwant Saharan, Deputy Director, Haryana Agriculture Department in Hisar, this time the sowing of crops has been affected due to late monsoon activity. In many districts, farmers have had to spend more diesel on irrigation. In areas where there was above average rainfall or where there was no rain, the yield would be affected. Due to excessive rain, cotton, guar and moong plants turn yellow and dry up. On the other hand, according to experts of Himachal Pradesh Agriculture Department, due to the rains at a fixed interval, maize and fruit plants in the state have benefited. The size of the apple is also good this time.