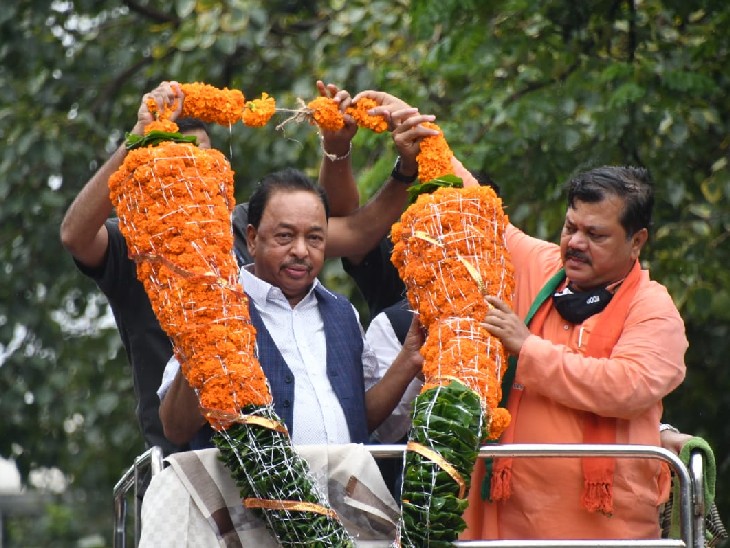 This “Jan Ashirwad Yatra” of Narayan Rane is of 560 kms.

Union Minister for Micro, Small and Medium Enterprises Narayan Rane on Thursday launched the ‘Jan Ashirwad Yatra’ from Mumbai amid heavy rains. During this, while attacking Chief Minister Uddhav Thackeray, he said, “This government cannot do any development of Maharashtra in any way. Chief Minister Uddhav Thackeray has set out to destroy this state according to his name. The crowd gathered during the ‘Jan Ashirwad Yatra’ proves that the people of Maharashtra are fed up with the ‘Maha Vikas Aghadi’ government.

When CM Uddhav opposed his visit, Rane said that he should not cross the path of his journey like a cat. Simultaneously, targeting the Shiv Sena in view of the Mumbai Municipal Elections, said that the pot of sin of their 32 years has been filled and it is going to burst soon.

Rane returned to Mumbai on Thursday, nearly a month and a half after assuming the post of minister in Central. He has started his ‘Jan Ashirwad Yatra’ by garlanding the statue of Chhatrapati Shivaji Maharaj installed at Mumbai International Airport. On this occasion, Rane said that the people of Maharashtra are looking forward to the formation of the BJP government in the state again.

Uddhav targeted on this visit of Rane
Chief Minister Uddhav Thackeray had made a scathing remark in the cabinet meeting on Wednesday on Rane’s visit, saying, ‘Trying to create a threat to the health of the people by organizing political, social and religious programs in violation of the rules is seen in the behavior of some people. is coming.’ The CM said that the parties involved in the Maha Vikas Aghadi government should refrain from organizing crowded events for at least two-three months.

Rane said – Crowd should be plentiful with corona protocol
Responding to this, Rane said, “Let me reduce the crowd.” I do not agree with this view. Because I believe that the crowd should be plentiful, but following the corona protocol. He said in his impeccable style, ‘No one can save anyone from Corona. If we talk about saving them (Shiv Sena), then we (BJP) are there for that. BJP is there to save Maharashtra. Because these people are bent on destroying Maharashtra.

During this visit of Narayan Rane, a large number of his supporters joined it.

Rane further said that whatever I have got in my life. He got it only because of Sahib. He is the one who made me. If he were alive today, he would have said that Narayan, you continue to achieve this kind of fame. My blessings with you Today even though his hand is not on my head, but his blessings are on my head.

Targeted Shiv Sena, said – don’t cross the path like a cat
Without naming Shiv Sena MPs Sanjay Raut and Vinayak Raut, Rane said don’t make rhetoric in protest against the darshan of any person or deity’s memorial. The feeling of the person concerned should be considered before speaking anything. He did not even mention the name of Chief Minister Uddhav Thackeray and said that if anyone has anything to say, he himself should come out and speak openly. It is not right to make any rhetoric by forwarding the people of your right and left. Because I am known for giving such answers. That’s why no one should come like a cat in the middle of this successful “Jan Ashirwad Yatra” of BJP.

Narayan Rane also offered flowers at the tomb of Balasaheb.

Fadnavis was fed up with me so sent to Delhi: Rane
Union Minister Rane said that for the first time in my life, I stayed away from Mumbai for one and a half months. Generally I have never been out of Mumbai for more than 15 days. He said in a witty and sarcastic tone, I don’t know if Devendra Fadnavis was bored with me? Which they sent me to Delhi. But he has sent me to Delhi out of goodwill, affection and love. Devendra Fadnavis believes that I can develop. I can work Because of this they have sent me from Maharashtra to Delhi.