New facilities in Yatradham: PM Modi will give gifts to Gujarat on August 20, will lay the foundation stone of Parvati temple with the inauguration of three projects of Somnath temple 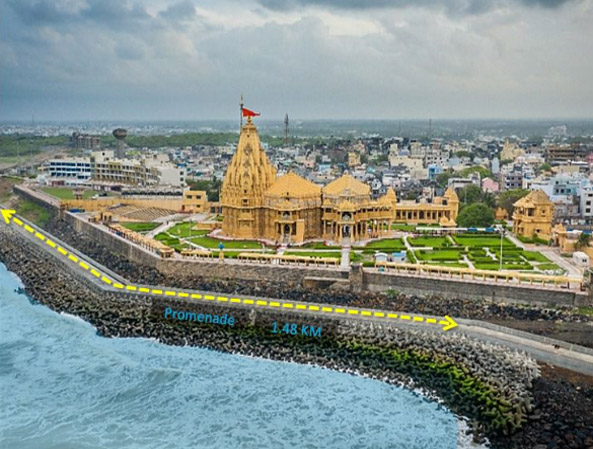 Walk-way built at a cost of Rs 45 crore near Somnath temple.

Prime Minister Narendra Modi will inaugurate four projects worth Rs 83 crore for the first Jyotirlinga Somnath temple on August 20 and lay the foundation stone of Parvati temple to be built near the main temple for Rs 30 crore. Let us tell you, PM Modi is also the chairman of Somnath Trust (SST), which manages the Somnath temple located in Prabhas Patan town of Gir-Somnath district.

This walk-way named ‘Samudra Darshan’ has been prepared on the lines of Marine Drive in Mumbai.

These projects will be inaugurated
Of the three projects to be inaugurated in Somnath, the first is a nearly two-km-long ‘Samudra Darshan’ walkway behind the temple on the sea side built at a cost of Rs 45 crore. Second, the temple has a museum built for 75 lakh rupees, in which the ancient artifacts of Somnath can be seen. The third one is the reconstructed “Ahilyabai Holkar Mandir” temple.

A museum built to see the ancient artefacts of Somnath.

A grand white marble temple of Parvati will be built
Over the years, new temples have been built around the Somnath temple. In which the grand Shri Ram temple has been constructed. Preparations are underway to build Golokdham. And now it has been decided to build a grand Shakti Peeth Parvatiji temple in the Somnath temple complex at a cost of Rs 30 crore. It is believed that the temple of Mother Parvati was situated near the Yagya Mandap. Due to this the temple is being constructed at the same place.

Design of Parvatiji temple being built at a cost of Rs 30 crore.

You will be able to enjoy the wonderful view of the sea from the walk-way
Let us tell you, a 1.25 km long walk-way has been built on the Arabian Sea on the banks of Somnath temple at a cost of Rs 45 crores. It has been designed on the lines of Marine Drive in Mumbai. Due to this, the devotees coming to the temple can also see the sea.
You can see the beautiful view. The walkway is also curved along the ocean like Marine Drive in Mumbai. People can walk on it.

Here tourists will also be able to see the arrow pillar, which tells the geographical feature of this place that there is a pillar on the sea side to the south of the temple. It is indicated by placing an arrow in the peak above that there is no land of earth between the Somnath temple and the South Pole.

The grand temple of Maa Parvati will be decorated with white marble near the Yagya Mandap.