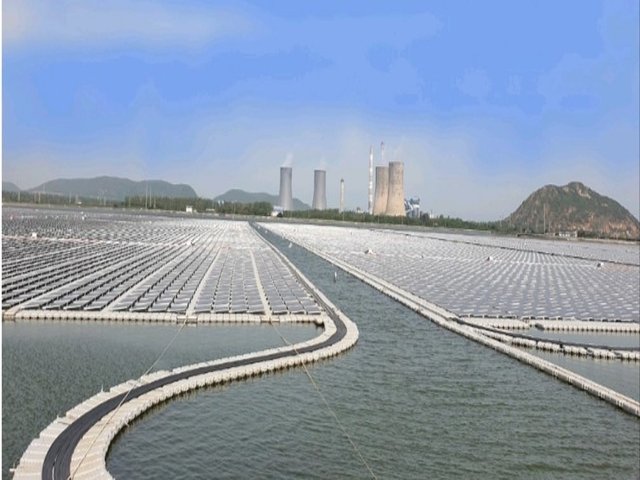 NTPC in a tweet announced that with the commissioning of India’s largest 25 MW floating solar PV project at NTPC Simhadri thermal station, the total installed capacity of NTPC has now reached 66,900 MW.

•The project is also the first solar project that will be set up under the Flexibilisation Scheme, notified by the Government of India in 2018.

•The project is spread across 75 acres in an RW reservoir. The anchoring design of the floating solar installation has been done uniquely.

•Generate electricity from more than 1 lakh solar PV modules that will aid in lighting up approximately 7,000 households.

•Save 1,364 million litres of water per annum which in turn would aid in meeting the yearly water requirements of 6,700 households.

•In another feat, NTPC is also building India’s largest 100 MW floating solar power plant on the reservoir of its Ramagundam thermal power station in Tamil Nadu.

•The 100 MW floating solar project with 4.5 lakh photovoltaic panels will be spread across 450 acres.

•The project will cost approximately Rs 423 crores. The project will aid in achieving India’s ambitious target of 175 GW of installed renewable energy capacity by 2022 including 100 GW solar installed capacity.

What are floating solar plants?

•Floating solar plants is the installation of photovoltaic panels on the water bodies such as lakes, basins, rivers, sea, ocean, etc as an alternative to land-based solar projects.

•The cooling effect of the water bodies further enhances the performance of solar panels by 5 to 10 per cent.

•NTPC has become a Maharatna company in May 2010. It is headquartered in New Delhi.

•NTPC’s initiative of installing floating solar plants across India aims at increasing its green energy production up to 30 per cent and reducing carbon footprints.