Police strict on check posts: Entry was not given without e-pass in the state, 500 vehicles of tourists were sent back to Sheghi 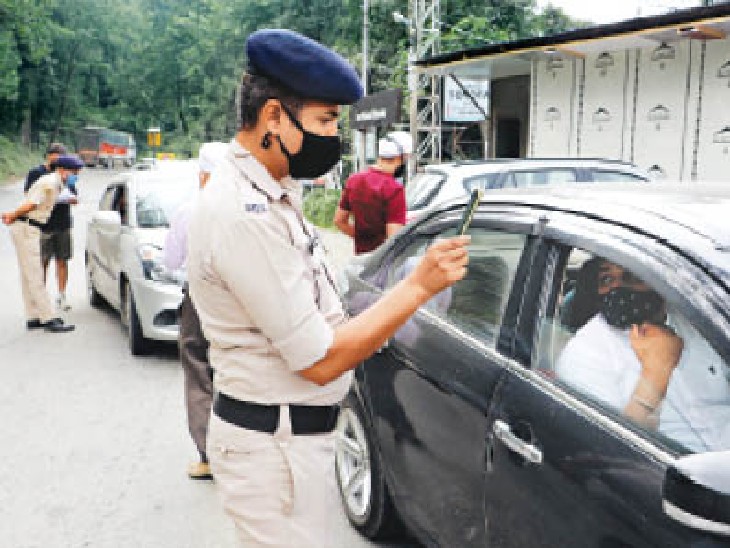 The picture is of Shoghi Barrier. The police were allowing the vehicles to go ahead only after seeing the registration on the mobile.

As soon as the e-pass system for entry in Himachal started, the police has tightened the check posts. No one is being given entry without e-pass. About 500 vehicles have also been returned from Shimla’s entry point Shoghi Barrier, who wanted to enter Shimla without a pass. A similar sight was seen at the entry point Parmanu Barrier in Himachal. Here also the e-passes of people coming to Himachal from outside states were checked.

Those who had made passes got entry, but those who did not have e-passes were sent them back. The state government, while issuing a notification late on Wednesday night regarding the increasing cases of infection, made it necessary to enter Himachal with e-pass. These orders were implemented with immediate effect. After which the police took strict action at all the entry points. SP Shimla Manika says that admission will be given in Shimla only according to the rules.

40% booking of Shimla hotels canceled
After the introduction of the ePass system, it has also affected the tourism business. Bookings of 40 percent hotels in Shimla have also been cancelled. In such a situation, hoteliers will also have to bear the loss. There are around 650 hotels in Shimla District. Most of the people in Shimla are associated with tourism business. In which there are taxi drivers, tour and travels, hoteliers, staff, shopkeepers and others, but all these classes will have to suffer due to cancellation of booking of hotels.

Hotel industry was in loss even last year
Last year, during the Kovid period, the hotel industry of Himachal suffered a loss of crores of rupees. When everything was closed, no one was allowed to enter Himachal. As a result, the hoteliers suffered a lot. Many people also lost their jobs. People directly involved in the tourism business had to bear the loss.

The tourists said – the plan was already made, had to return
Hardeep, Kamalpreet, a tourist from Punjab who reached the Shoghi barrier, and Rajendra, a tourist from Delhi, Aman said that they had already prepared a plan to come to Shimla and had booked hotels. He was supposed to stay here for a week. After which he was to go back, but suddenly when he reached the Shoghi barrier, he was asked about the e-pass. But they did not have the pass, now they have to go back from here.