Poor mother’s dream was to fly in a helicopter: On 50th birthday, the son surprised, made the mother go around the whole city by sitting on the helicopter 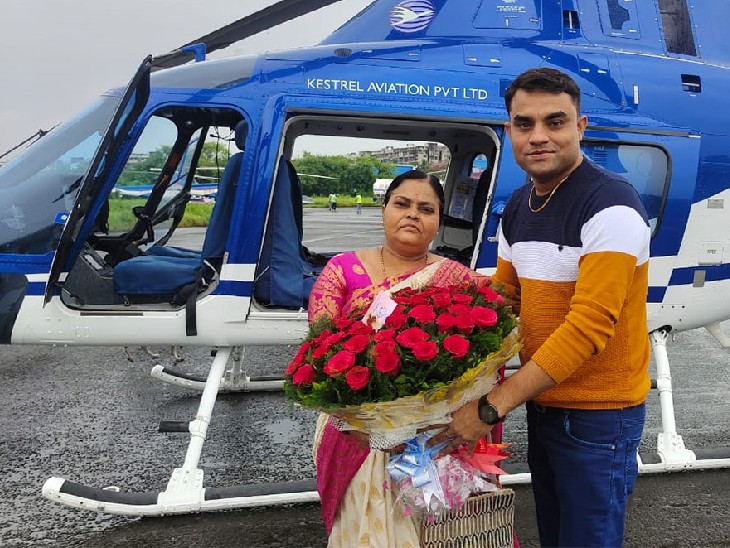 Son took the mother to Juhu Airbase on the pretext of getting Siddhivinayak darshan and surprised her.

In Ulhasnagar, Thane, a young man, fulfilling his mother’s many-year-old wish, took her on a helicopter and took her round the city. People are comparing this effort of a son with Shravan Kumar of Kali Yuga.

Tuesday was the 50th birthday of Rekha Dilip Gard, mother of Pradeep Gad, a resident of Ulhasnagar. Pradeep had arranged a surprise helicopter ride to give a gift to his mother. Seeing this unique gift from her son, Rekha could not hold back her tears and she cried several times during the ride.

Seeing the helicopter flying on the roof of the house, many years ago the mother had expressed her desire to sit in it.

Mother taught three children working in homes
Rekha is originally from Barshi in Solapur district and shifted to Ulhasnagar with her husband after marriage. Rekha has a total of three children and Pradeep is the eldest among them. When Pradeep was studying in class 7th, his father passed away. After that the mother taught her three children by doing hard penance. To feed the children, Rekha also had to work in the homes of others. Taught the elder son Pradeep in the school of the ashram and after the hard work of the mother, Pradeep is today on a big post in a construction company.

The entire family took a helicopter trip with Rekha.

Seeing the helicopter flying over the house, the mother had expressed her desire
Pradeep told that when he was in class XII, a helicopter was flying over his house. Mother looked at the helicopter and said will we ever be able to sit in it. On the same day I had decided that one day I would definitely take a helicopter tour to my mother. There was no better day than her 50th birthday to fulfill her mother’s wish. Mother is very happy now and her dream has come true.

After the death of her husband, Rekha also worked in the homes of others.

Mother said – God give such a son to everyone
This gift given by the son to the mother has become a topic of discussion in the whole city. With Pradeep’s efforts, the whole family has moved out of the chawl and started living in the flat. Pradeep is married and has two children. Pradeep told that on Tuesday, on the pretext of taking his mother to Siddhivinayak, he reached the Juhu airbase directly and surprised him by showing the helicopter.

After this effort of the son, Rekha could not hold back her tears and was seen crying again and again. During this Rekha said, ‘God give such a son to everyone.’ The whole family enjoyed the helicopter ride for about half an hour.