Power politics: 5 programs in 5 days of Darshana, CR Patil was absent in all, did not even reach where he was supposed to preside 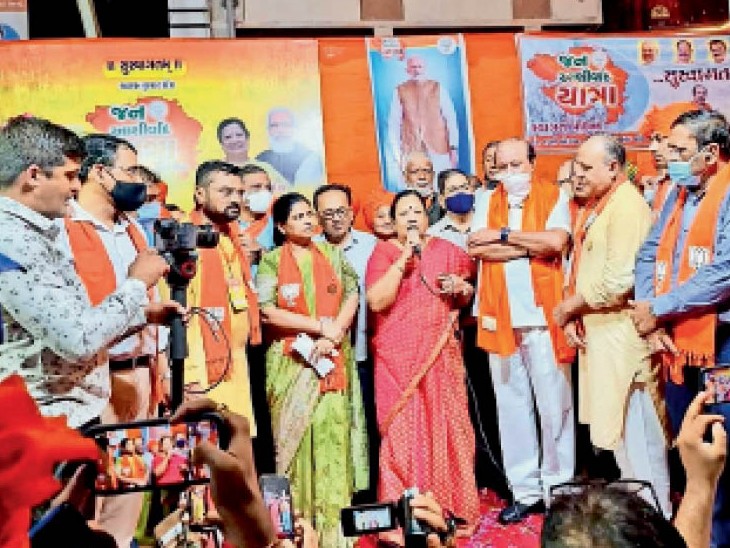 On August 17, all the leaders of the city except CR arrived in the Jan Ashirwad Yatra.

After returning to the city as Minister of State for Textiles and Railways, the process of welcoming Darshana Jardosh continues, but due to the absence of BJP State President CR Patil in these programs, many questions are being raised in the political corridors. It is discussed that there is dissatisfaction in a faction in the city BJP after Surat MP Darshana Jardos was made the Union Minister. Political experts are also accepting this fact. After becoming a minister, Darshana Jardosh was in the city on August 17. There have been five events since then.

CR Patil was invited to these programs, but he remained absent. Whether it was a meeting of BJP leaders, a program to make Mahuva train daily at Surat railway station, a CREDAI program or a Chamber function, Patil did not reach anyone. There is talk of estrangement due to his absence in all these programs. However, CR Patil has denied this. He said that he was in Mehsana on August 19. There is no estrangement going on between him and MP Darshana Jardosh. He said that all these things have no meaning. Supporters of MP Darshana Jardosh say that no hoarding-banners were put up in the city after becoming a minister at the Centre.

August 17: All the leaders of the city except CR arrived in the Jan Ashirwad Yatra
After becoming the Minister of State for Textiles and Railways, Darshana Jardosh came to the city for the first time on August 17 with the Jan Ashirwad Yatra. When Darshana entered the city from Kamrej at 5 pm on Tuesday, Mayor Hemali Boghawala, MLA VD Jhalawadia, District BJP chief Sandeep Desai welcomed him. The yatra went to 13 places in the city, but CR Patil was not present.

August 19: Called to flag off daily Surat-Mahuva train but Patil did not reach
On 19th August at 4 pm, Minister of State for Railways Darshana Jardosh flagged off the Surat-Mahuva train to regularize the train. CR Patil was invited as a special guest in this program. It was also mentioned on the banner of the program. He was waited for half an hour, but he did not come. For the first time, CR Patil did not attend any program of the railway.

August 21: Chamber made ceremony president in its program, but did not come
Chamber of Commerce held a reception for Darshana Jardosh at Platinum Hall, Sarsana at 6 pm on Saturday. The name of CR Patil was printed on the invitation card as the President of the function. CR Patil did not even attend the event.