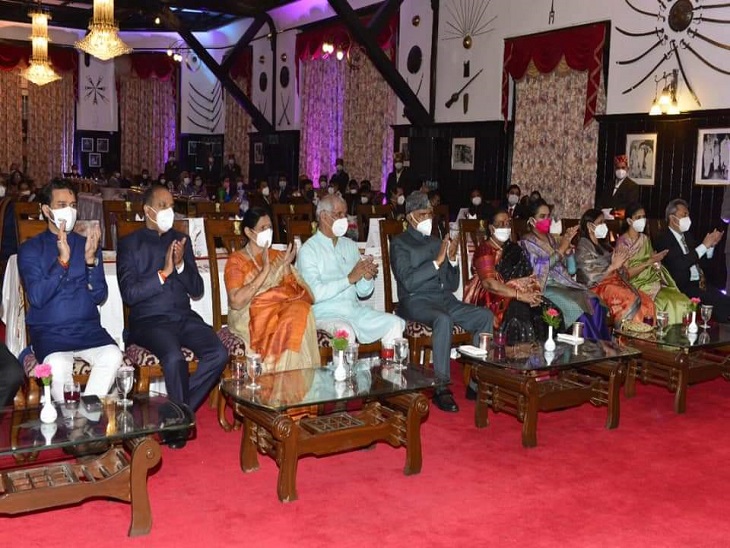 The President and others enjoying the cultural program during the dinner organized at Raj Bhavan.

The President of the country Ram Nath Kovind is on a visit to Himachal. Due to their stay in Shimla, many restrictions have been imposed on the people by the administration. Due to which the general public is suffering. But as soon as the President came to know that people were facing a lot of trouble during his visit, he got angry.

While instructing the administration, he said that there should be no such arrangement during their movement, which would cause trouble to the people. After this, the administration ordered to keep the shops open during their movement on the Ridge Maidan which it had decided to close. On the one hand, the movement of people also continued smoothly and also the movement of the President’s family. After this decision of the President, there is an atmosphere of happiness among the people of Shimla.

This security arrangement was made

In fact, it was to happen that the convoy of President Ram Nath Kovind was to pass through the Mall Road towards the Raj Bhavan. Therefore, the administration had instructed the businessmen that when the President’s convoy passes from here, they will have to shut down the shutters of their shops and the common people will also not be allowed to come to the Ridge and Mall Road during this movement. Therefore, the local people including the traders were very angry with this decision of the administration.

People said that if the administration has to do VIP movement, then why are they putting the general public in trouble. It can be solved in some other way also. If it is about the security of the President, then not only the administration but also the people of Shimla are ready. The President has come to Shimla and the first responsibility of his security rests with the people here.

President and others in group portrait with artists at Raj Bhavan.

When the President found out, he was very angry.
At the same time, when President Ram Nath Kovind came to know that people were facing problems during his stay in Shimla, he instructed the administration not to harass the people. After this, when the President’s convoy passed through Ridge Maidan and Mall Road for Raj Bhavan on Friday evening, the shops remained open. People were moving around. Police had kept the road open for one-way convoys. Here people were forbidden to walk, while people were walking smoothly from the other side of the road. In such a situation, people were very happy after this decision of the President. At the same time, the faces of the shopkeepers also remained happy. Shopkeepers and locals said that the administration should have made such arrangements even before the President asked.

Cultural program held in Raj Bhavan in honor of President
A dinner was organized on Friday at Raj Bhavan in honor of President Ram Nath Kovind. Apart from this, cultural programs were also held. Bathu ki kheer was also served to the President in the dinner along with the vegetable of Guchhi. Apart from this, many dishes were also made. The artists presented programs in front of the President in Himachali costumes. Artists presented a gathering of Sirmauri Naati and Kangra. Governor Rajendra Vishwanath Arlekar, Chief Minister Jai Ram Thakur, Acting Chief Justice of the State High Court Ravi Malimath were also present on the occasion. He welcomed the President on his arrival at the Raj Bhavan.